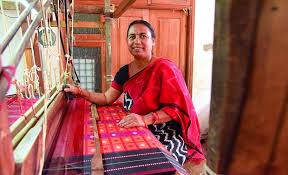 Bhubaneswar: Three handloom cooperative societies–  Gouragoan of Bargarh , Kotapala of Khorda and Berhampur Cotton of Ganjam districts –were felicitated with cash award of Rs 1 lakh each and plaques for providing services to weavers continuously for 75 years.

The societies were honored by textile and handloom minister Snehagini Churia at a state-level function organized by the government on the occasion of National Handloom Day on Monday.

Similarly, three handloom cooperative societies–Nuapatna Utkal ECP of Cuttack district, Barpali Janata Bastralaya of Bargarh, and Nuapatna Kalyanimayee of Cuttack districts– were given cash rewards for doing highest business in handloom products. While Utkal ECP was handed over a cash reward of Rs 3lakh, the Janata  and the Kalyanimayee were given Rs 2 lakh and Rs 1 lakh respectively.