After Gorakhpur, Children Die for Oxygen in Raipur : NHRC Shocked 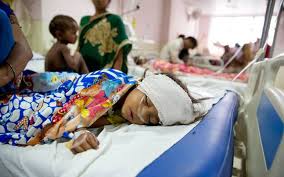 New Delhi: The National Human Rights Commission (NHRC) has taken suo motu cognizance of media reports about the death of four newborns  on Sunday night at the government-run Ambedkar Hospital in Raipur, the capital city of Chhattishgarh, allegedly due to disruption in the supply of oxygen. Police have arrested the oxygen plant operator, who was found drunk on duty. A notice has been issued to the chief secretary of  Chhattisgarh calling for a detailed report in the matter within four weeks.

The Commission has observed that hardly two weeks back, in a similar reported incident, about 60 infants and children had died at the BRD Hospital in Gorakhpur, U.P.  In both the cases, human error and negligence, reportedly, became the cause of deaths. It seems that nothing has been learnt from that tragedy.  A death whether of an infant, child or of a grown up person, causes irrevocable loss to the families.  No probe, amount of monetary relief and punishment to the culprits can compensate the loss of a human life.

The Commission is of the opinion that the suitable effective measures are required to be taken to address such problems. There is a need for issuance of suitable instructions to all the government run and private hospitals to ensure that such lapses do not occur.

As per the media reports, carried on the 22nd August, 2017, the health secretary of  Chhattisgarh has denied that the deaths were due to disruption in the supply of oxygen, but he also admitted that the level of oxygen in a few cylinders was found to be low. The health officials have, reportedly, told that it was possible that the drop in oxygen pressure in the Children Special Care Unit may have caused the deaths.  Reportedly, the chief minister of Chhattisgarh has ordered stern action against those found guilty for the incident.