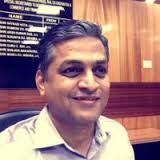 Bhubaneswar: Chief minister Naveen Patnaik’s  announcement that the state government employees would get  7th Pay Commission salary from September, 2017 has made 4.5 lakh employees and 3.5 lakh pension holders happy. But, the annnouncement has made more happy the state IAS,IPS, IFS (Forest) officers in general and the state finance principal secretary TK Pandey in particular.

Ironically, Pandey, was a victim of the state government’s decision to delay the implementation of the pay panel report. Pandey, who was on Central deputation at Delhi till July 2016, had been receiving enhanced salary  as per the 7th PC. But, on his return to the state cadre in September, 2016, his salary has been fixed at a lower as per the 6th PC. The state general administration department, which is regulating the IAS cadres, has opined that he has to satisfy himself with the 6th PC as the state government is yet to take a decision regarding implementation of 7th PC in case of Central government personnel.

Pandey was  not  receiving  his salary in protest.

Chief minister’s Officer-on-Special Duty(OSD) Manoj Mishra was also suffering due the delay in decision. Mishra,  an Indian Railway Officers, is working in Odisha government on deputation as the Rail-Coordination Commissioner. He was getting 7th Pay Commission salary when he was the secretary to the general manager East Coast Railway. However, when he joined the Odisha government on deputation he started getting less salary. His salary was fixed according to the 6th Pay Commissioin.

Now with the implementation of the Pay Commission in the state, Pandey and Mishra would get their due salary once agai.

As such the All India Service officers like IAS, IPS and IFS officers working in the state were aggrieved as they were not getting the 7th Pay Commission salary even though their counterparts in  government of India and many other states were getting enhanced salary. They were denied the hiked salary as the state government was yet to implement the 7th Pay Commission salary in the state.

The government of India has notified the implementation of the 7th PC recommendations for the Central government employees from on July 25,  2016 and for pensioners from August 4, 2016, and has started paying enhanced salary to its 1 crore employees including the  IAS, IPS and IFS. Even some of the state where the government has not implemented the Pay Commission recommendation has started giving the hiked salary to the IAS, IPS and IFS working in the state cadre.

The Odisha government, however, asked the All India Service officers to wait till the Pay Commission salary introduced for the state government employees.

In Odisha, the sanctioned strength of Central government personnel is 555. Out of this the number of   IAS post is 226 and IPS post is 188 while that of the IFS is 141. Besides, Central government employees from Comptroller & Auditor General, Indian Railways, and Income Tax departments are serving the state on deputation. The worst sufferers, however, were the pensioners.

However, the All India service officers and the elite pensioner must having a sigh of relief now.