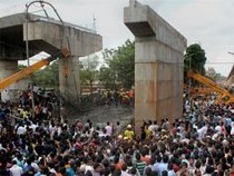 Bhubaneswar: A two-member technical experts will probe into the Bombikhal flyover collapse incident in the city. The chief engineer,design, and chief engineer, raods, would inquiry into the matter.

“A high level inquiry has been ordered by chief engineer, designs, and chief engineer, roads,” said the Odisha chief minister, Naveen Patnaik, here on Sunday. He asserted that exemplary action will be taken against those found guilty, adding that deputy executive engineer Bansidhar Praharaj and assistant engineer Kishore Rout have been placed under suspension.

Patnaik, while expressing grief over the death of a person due to collapse of a span of the under construction flyover, announced that Rs 5 lakh ex-gratia would be given to the family members of the deceased person from the chief minister’s relief fund(CMRF). He also announced that the treatement cost of the injured will be borne entirely by the government.

Patnaik has asked the authorities to clear the debris on a war footing.

The works secretary, Nalini Pradhan, who had visited the spot, has assured that strong action would be taken against the contractor and engineers if found guilty in the probe. He said that Panda Infra has been entrusted the job in 2013 to complete the work by 2014. However, due to land acquisition problem the project would could not be completed by then. It was rescheduled to complete the work by December 2017.

The flyover-cum-railway over-bridge over the Sahidnagar railway crossing collapsed on Sunday morning killing one person and injuring badly 14 others. Satya Patnaik of Jharpada died in the incident. Patnaik, who had taken his daughter to a dance class in Sahidnagar, was hit by the collapsing flyover while returning. His daughter Sheetal has been admitted to AIIMs hospital where doctors say that she is safe.