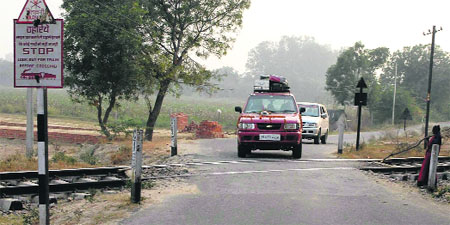 The division has eliminated all the UMLCs from its jurisdiction by March 2018, much before the target period. The Indian Railway has set a target to remove all UMLCs by 2020.

Giving highest priority to Rail-Road safety and to reduce mishaps and human casualties, Khurda Road Railway Division has eliminated 297 UMLCs during last four years. Out of which, 43 UMLCs were closed, 38 by providing Road Under Bridges (RUBs) or by Limited Height Sub-ways (LHSs), 27 by diversion and 189 UMLCs were manned.

From, August, 2014 o­nwards, Khurda Road Division has deployed Gate Mitras/Gate Counsellors at 74 vulnerable/sensitive Level Crossing Gates to prevent accidents and alert commuters about the approaching trains. Recently, all the Gate Mitras/Safety Counsellors have been provided with fluorescent safety jackets.