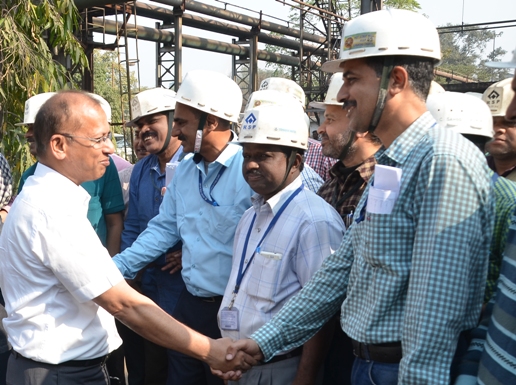 Rourkela: Rourkela Steel Plant has turned the corner in 2017-18 by setting several benchmarks in the field of production and productivity. In all the three major production areas of  Hot Metal, Crude Steel and Saleable Steel, RSP has registered its best ever performance since inception. The total dispatch has also been an all time high.

“The self belief of Team RSP has resulted in the Steel Plant crossing new frontiers in every field of endeavour,”said RSP CEO Ashwini Kumar.

With the production of 3.32 million tonnes (MT) of Hot Metal the Plant has registered a robust growth of about 7.3% over the previous fiscal. The total Crude Steel as well as total Saleable Steel production has also improved by 9.8% and 7.2% respectively.

Some units that have performed outstandingly well are New Plate Mill, producer of high value plates that recorded a whopping growth of 48.1% over the year 2016-17. The New Plate Mill exported about 1 .27 lakh tonnes of CE marked plates to the European market, thereby creating a niche for itself in the international steel firmament. The 60 year old Hot Strip Mill set its all time high record of making 16.8 lakh tonnes of HR coils during the year which is a rise of 7.7% over 2016-17. Producer of another high value product Spiral Welded Pipe Plant recorded a stupendous growth of 26.7%, while production of Galvanised Sheets witnessed an improvement of 6.3%. All these remarkable performances have led to a significant increase of 8.4% in the dispatch of total Saleable Steel.

Some other star performer units are the Sinter Plant-3, which created the best single day production record 12 times in the year, while the Ore Bedding and Blending Plant (OB & BP) dispatched more than 9 million tonnes of raw material during the year. Traffic and Raw Material Department reduced the wagon turnaround time substantially, thereby adding to the bottom-line significantly. The Coke Oven Battery-6 registered its all time high performance during the year, while the Special Plate Plant recorded best ever dispatch of plates for use in the defense sector. The Engineering Shops developed tailor-made spares and components worth about Rs. 123 crores by using in-house resources that helped in quick stabilisation of the modernised units.

Another area in which RSP performed exceedingly well is the Techno-Economic parameters. At 410 kg per tonne of Hot Metal, the Coke Rate achieved in the Blast Furnaces is not only the best-ever-since-inception figure but is also one of the major positive contributors to the financial performance of the Plant.  In the field of sales of secondary products too RSP recorded an impressive figure of about Rs 1577 crores.

With new highs in production and productivity, RSP collective have led to the Steel Plant registering an   EBIDTA (Earnings before Interest, Tax, Depreciation and Amortization)  turnover ratio of about 15% in Q3 of last fiscal, after a gap of ten quarters which is an encouraging figure by industry standards. The momentum continued in the Q4 of the fiscal thereby making H2 of the year 2017-18, watershed   period for RSP.