Lord Lingaraj’s chariot ready, but will not roll this season 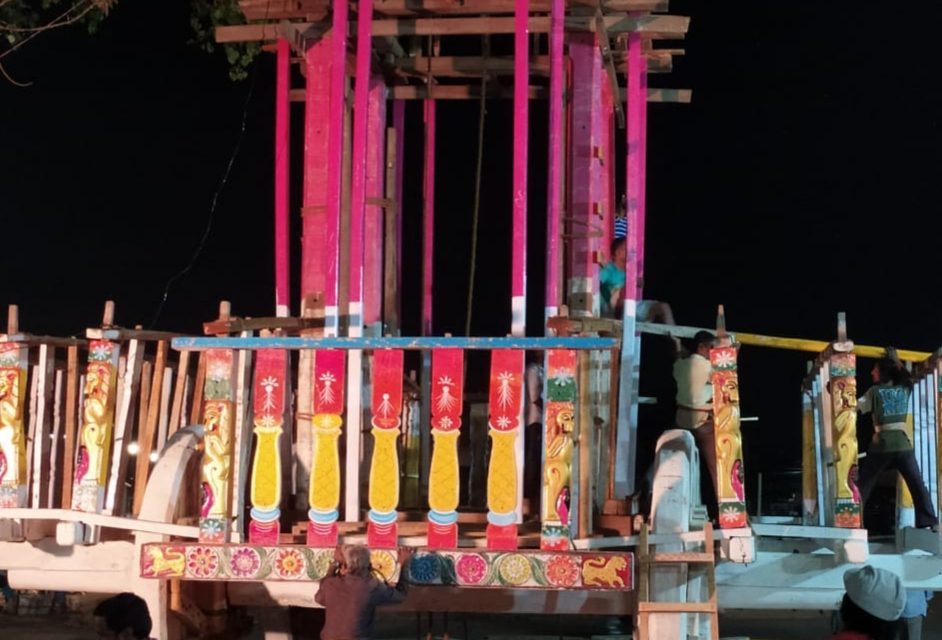 Bhubaneswar : Rukuna Rath, the chariot of Lord Lingaraj is ready. But the chariot will not roll this season.

Bata Krushna Maharana is a disappointed man today. The chief carpenter who has been heading the artisans  those build the chariot recalls, “For the first time in living memory, the age-old tradition of Rukuna Rath Yatra of Lord Lingaraj has been suspended.”

Due the Corona Virus outbreak, both the temple and district administration have decided not to hold the annual festival that falls on April 1.

For the devotees of Lingaraj, the Rukuna Rath Yatra is believed to be “Papa Binashakari Yatra”  the one which destroys and  eradicates all evil and sins. It is the biggest festival of the temple city. On this auspicious day, the Utsav Vigraha (Chalanti Pratima) of Lingaraj, along with Gopalini (Parvati), Kumara and Nandikesvara including the image of Govinda are taken out in a Rath from the Lingaraj temple to the Rameswar temple. For the denizens of the various Sahis of the Old Town, this annual weeklong festival is the high point of festivities in which locals throng with fervor and gusto.

The Rath is drawn by the devotees from the Lingaraj Temple to the   Rameswar temple also called Mausi Maa and starts its return journey on the fifth day. This year, a miniature replica of the Rukuna Rath was showcased in the Odisha tableau during the Republic Day parade at New Delhi. The Rukuna Rath Yatra is believed to predate the Rath Yatra at Puri.

A crestfallen Batakrushna Maharana  said that 75 carpenters had been working for the last three weeks, every day from 9 AM to 10 PM.  Nearly a thousand logs had been collected; new chakas (wheels) and akhas (axles) had been made. Four new Nahakas and two new Oras were constructed this year. Five tailors had nearly finished the work. Only the painting of the chariot was to be done.  It was initially decided that the Gods would be got to the Chariot and then carried on a palanquin to their destination.

However, looking at the scale of the pandemic, even this plan was shelved. Another uniqueness associated with the Rukuna Rath Yatra is the auction of Marichi Kund water which is held at the Mukteswar temple. The belief that imbibing the water cures infertility if taken on the penultimate night of the Rath Yatra draws many hopefuls each year.