Is freedom fighter’s divorced daughter too entitled for family pension? 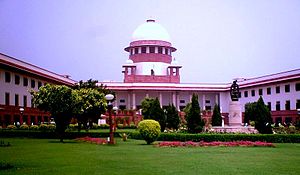 This is the question now before the supreme court.

Interestingly, while one high court has said ‘Yes’, another court ruled,’No. It is not bounty’.

Now the apex court is seized of the matter to resolve the question.

A three member bench comprising of justices U U Lalit, M M Shantanagoudar and Vineet Sharan, issued notice to the Centre and sought its response by the end of July.

The Punjab and Haryana high court in a case in 2016 has held that freedom fighter pension shall also be applicable to the divorced daughter. It said that Khajani Devi be considered as eligible dependent at par with unmarried or widowed daughter.

However, in case of Tulsi Devi, the Himachal Pradesh high court passed a contrary order.

Referring to the Punjab & Haryana high court order, Tulsi Devi’s advocate Dushyant Parashar said the Himachal Pradesh High Court had committed serious illegality by not considering that petitioner being a divorced daughter was also dependent on Swatantrata Sainik Samman Pension being given to her late mother after the death of her father.

He pointed out that when the Centre challenged the Punjab and Haryana High Court order, the top court on September 27, 2019 dismissed the appeal and refused to interfere with the 2016 verdict. Not only that, the apex court has then agreed with the view of the Punjab and Haryana High Court saying that its 2016 verdict adopts a progressive and socially constructive approach to give benefits to daughter who was divorced treating her at parity with the unmarried daughter.

The bench noted the submission in the order and asked Parashar to file within three weeks instructions issued by the Ministry of Defence on December 14, 2012, which includes a divorced daughter in the category of eligible dependents for grant of liberalised/special family pension beyond 25 years.

Tulsi Devi,married in 1980, was staying with her parents as her marriage broke after five years and she was turned out of her matrimonial home and her husband married another woman. After her father, Gopal Ram, a freedom fighter pension holder, died in 2007, she was depending on her mother’s family pension.

Her mother Kaushalya Devi had written a letter to the prime minister’s office from the death bed in January 2018 appealing that the family pension be given to Tulsi Devi as she had no earning of her won and no one to look after her.

The PMO turned down her request on September 5, 2018. Tulsi approached the Himachal Pradesh high court for grant of family pension when her mother died.

The High Court last year dismissed her plea and made the distinction between pension granted to dependents of freedom fighters and armed forces personnel and central government employee.