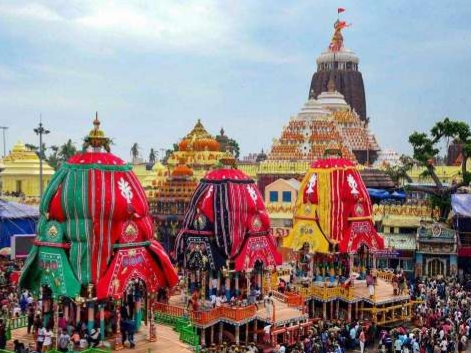 Bhubaneswar: As the three member supreme court bench headed by chief justice SA Bobde decided to hear the petitions seeking amendment to the interim stay order on Puri Rath Yatra, top officials of Odisha government huddled together to keep every thing in place to conduct the Rath Yatra expecting that the court will give a green signal for the annual ritual amending it’s earlier stay order.

The chief secretary Asit Tripathy accompanied by Police DGP rushed to Puri to take take stock of the things. Earlier, the Puri Jagannath Temple chief administrator Krishan Kumar and district collector Balawant Singh along with the district police chief had a meeting on conducting the Yatra on an eventuality. The vendors along the Puri Grand Road were asked to vacate the place.

The chief minister, Naveen Patnaik, had a meeting on Ratha Yatra preparation at 5 pm.

The State minister Arun Sahoo said that the State government along with the Central government had facilitated an order from the apex court regarding conducting the Rath Yatra. The Odiaha government is committed to conduct the Yatra peacefully and safely.

Union minister Dharmendra Pradhan has assured all help from the Centre in conducting the Yatra.

Chief secretary Asit Tripathy, who reviewed the preparedness for Ratha Yatra in Puri along with DG Police, chief administator JTP , sevayats and all the concerned, said, “All the related departments are fully prepared. The Ratha Yatra will be devotee and visitor less on Badadanda. All directions of Hon’ble Supreme Court will be fully complied”.