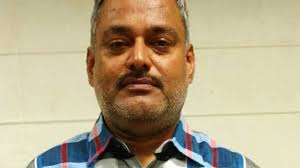 Ujjain (Madhya Pradesh): Are you on the run. Apprehending a fake encounter. Desperate for a safe surrender. Then go to a famous temple and expose yourself for the arrest.

This is the new idea the dreaded criminal Vikas Dubey of Kanpur gave to his fraternity on Thursday.

Dubey, for whom a massive manhunt was launched by the Uttar Pradesh police ever since he killed 8 policemen in Kanpur last week, has been apprehended from the famous Mahakal Temple of Ujjain on Thursday morning.

Vikas was on the run for the last six days. Several of his accomplices were killed in police encounter. He, however, eluded the police. He gave a narrow slip to the UP police in Faridabad of Haryana and crossed two States to enter into Madhya Pradesh.

Vikash was found wandering in the Mahakal Temple premises on Thursday morning. On suspicion, the Temple guard questioned him and came to know that he is the Vikas Dubey of Kanpur. Subsequently, Dubey was arrested by the MP police.

Even though the MP police, MP chief minister Shivraj Singh Chouhan and home minister Narottam Mishra claim Vikas wss arrested by the police and not surrendered, nobody takes them seriously after seeing video footages.

Why Vikas chose Mahakal Temple for his surrender? is a question that haunts many. But, the answer seems to be very interesting.

Big temple means big crowd. And crowd gives an assurance. The CCTV cover of the temple deters the police which would not like to leave any evidence of their misconduct. And, the unarmed temple guards ensures that there would be no firing.

Vikas Dubey took advantage of this and safely landed in the custody of UP police.