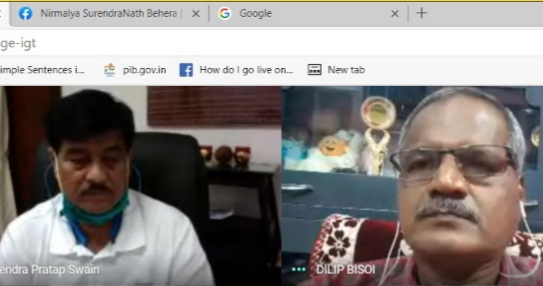 Bhubaneswar: The much popular Pradhan Mantri Garib Kalyan Anna Yojana be made universal.

This was what viewed by the panelists at the Webnier on PM Garib Kalyan Anna Yojana, organised by Regional Outreach Bureau,Bhubaneswar, of union I & B ministry, here on Friday.

Addressing the Webneir, minister RP Swain said the Centre should think of expanding the PMGKAY so that it would cover all those vulnerable people who are now out of the purview of NFSA.

He said that the Odisha government has covered 7 lakh families those are not included in the NFSA.

Stating that the Odisha chief minister Naveen Patnaik of the view that no one should go to sleep without food, Swain said the State has introduced State Food Security Scheme when it found certain sections of the society left out from the NFSA. He said that the Center should make the PMGKAJ universal at least to protect those who have not been included in the NFSA from hunger and death.

India Whispers Editor Dilip Bisoi said the timely announcement of the PMGKAY has saved millions people from hunger and possible death. He said there should be an effort to make this scheme expended to all.

Professor Mishra, Pati and Nayak dwell of the food security of people during the pandemic time. They said that the PMGKY which has been extended till November 2020 would solve the food problem of the poor people during this difficult time.