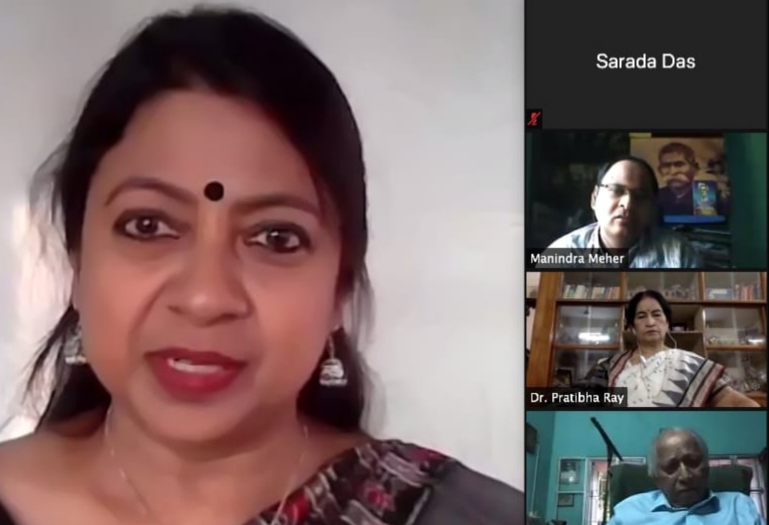 The webinar was graced by icons from the world of Odia literature Padma Shri Pratibha Ray, academician and writer; Santanu Kumar Acharya, writer Manindra Kumar Meher as speakers. Writer Paramita Satpathy was the moderator of the webinar.

Ramachandra Nath, chief editor, Pallivani anchored the webinar and welcomed the audience, guests and speakers. Paramita Satpathy, moderator of the session started the panel discussion and said, “While Odia language has already got classical language status it is one of the most ancient languages. Literature is a path in which pure consciousness flows. Being a source of this flow, when a language or cultural ethos or social commitments flow with it together, they nurture rich literature.

Speaking about the past, present and future of Odia literature, Pratibha Ray said that, Odia literature has its existence since 3rd century BC. One can find traces of Odia script in Shilalipi and Brahmilipi, inscripted during the time of King Ashoka besides minor inscriptions of Kharavela in the Udayagiri and Khandagiri Caves, which gives first glimpse of possible origin of the Odia language. Adding to this, she said, “If we go into the depths of Odia language and its background, we can see that Odia language has played a significant role in our society. The process of creating literature gives peace to one’s soul. Literature has always been closely associated with our roots and our society. If we want to enrich our literature we need to take care of three important aspects- our self respect, self belief and self esteem. Speaking on the future of Odia literature Dr. Ray said, if we will nurture our literature it will continue to grow.

Santanu Kumar Acharya said that, literature is considered as the engine of this world. Without literature the world can’t survive. Creation of literature is the reflection of one’s soul. He expressed disappointment that since 1913 after Rabindranath Tagore, not a single Indian writer has been awarded Nobel Prize for literature. He further added that literature can’t be enriched if we restrict ourselves in regional boundaries. We must give flight to our thoughts.

Giving a comparison between pre and post Independence literature,  Manindra Kumar Meher said that, we can’t avoid ancient literature. The literature of post independence era is driven by our rich ancient literature only. He said, if a person reads literature of the earlier era his conscience will become pure and clean. Speaking on the popularity of today’s literature he said, if literature reflects contemporary life, more and more people would be attracted to read literary works.  Adding to this, he said critics must use their strong analytical skills to inspire readers to read right kind of books.