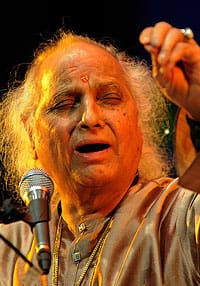 New Delhi: Eminent musician Pandit Jasraj died in US on Monday. He was 90.

Pt. Jasraj is an complished Indian classical vocalist belonging to the Mewati gharana. A musical maestro he had a musical career spanned more than 80 years and led to numerous major awards.

He was honoured with Padma Vibhushan Award.

His performances of classical and semi-classical vocals have become albums and film soundtracks. Jasraj has taught music in India, Canada and the US.