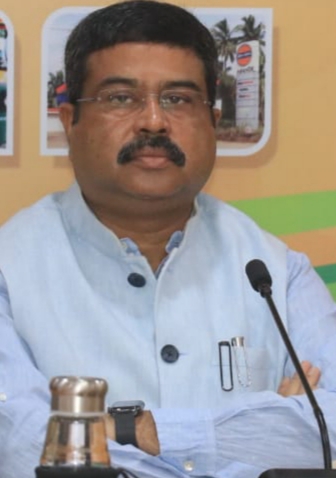 He said that presently more than 400 districts of the country are being covered by the City Gas Distribution network.

Speaking on the occasion, the minister said that in the last 6 years, the number of CNG stations has gone up from 947 to over 2300.

Pradhan said that India is moving towards becoming a gas-based economy. He said that the government is committed to provide infrastructure to facilitate this, and 17,000 km long pipeline is being laid for the purpose. He said that the places like North-eastern states and the eastern India, which were deprived of the access to gas, are also being covered. Efforts are underway to complete the national Gas Grid in a time bound manner.

He said that the government with the spirit of Sabka Saath, Sabka Vikas has worked to usher in a blue flame revolution in the country. Over 28 crore households have been provided LPG connections and an ambitious plan to provide 5cr households with PNG connection is underway.

The minister expressed his gratitude to the finance ministry and the Reserve Bank of India, for facilitating growth of CBG ecosystem in the country. He said that Compressed Bio-gas (CBG) has been included in the priority sector by the RBI, which will help the entrepreneurs to get cheaper and easier access to loans.

The minister said that India is one of the largest energy consumers in the world, and this would further go up as the country marches ahead on the path of progress. Recalling the prime minister’s call of energy justice and Aatamnirbhar Bharat, Pradhan said that energy available to the people should be sustainable, accessible, affordable and this would lead to energy security.

Ministry of Petroleum and Natural Gas secretary Tarun Kapoor said that the government is fully committed to the ushering of gas economy in the country. He called upon the vehicle manufacturers to promote the factory-fitted CNG vehicles, and reduce fitting the external kits for the same, so that our transport sector can use more CNG.