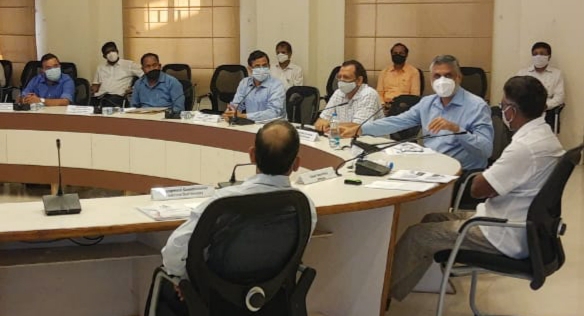 The chief secretary, Asit Tripathy, Thursday presented a preliminary report on the damages caused to houses, crop and public infrastructures estimating the loss at Rs 1,100 crore. Tripathy had a discussion with the visiting Central team which assessed the flood damages in four worst affected districts of the State during the last two days.

The report has estimated that crop on 2.25 lakh hectares farm land sustained 33% damages and 1.20 lakh houses damaged in the flood.

SRC Jena added that a slew of advance preventive measures were taken. Twenty four hours continuous patrolling was undertaken on vulnerable embankments. Around 795 piping were detected and remedial measures were taken. Sandbags were dowelled in 334 locations and 151 sluices were opened for escape of the water. A total number of 17 ODRAF, 14 NDRF and 22 Fire Teams were prepositioned at vulnerable places. Ten numbers of mobile RO water supply plants were pre positioned in most vulnerable areas for supply of drinking water pouches to marooned people.

Around 1.73 lakh people were evacuated to safe shelters. Because of the flood around 6066 villages in 1276 GPs and 21 ULBs of 18 districts were affected. Near about 13.87 lakh population were marooned and crop in around 3.1 1 lakh hect was affected. Sand cast also affected around 62.46 hect of crop land. As immediate response, extensive relief operations were undertaken in shape of supply of cooked food in shelters, distribution of polythene, distribution of water pouches, disinfection of tube wells in affected areas, vaccination of animals, arrangement of mobile health camps in the GPs, distribution of halogen tablets, ORS packets, cattle feed and organization of medical camps etc. (around 35706, distribution of halogen tablets.

The members of the team presented their field experience and narrated the kind of loss caused to housing and public properties. They appreciated the proactive efforts of State Government in mitigation of the effects of high flood and assured to support the State both as per SDRF norms and mitigation measures.

As per first hand preliminary estimates, the worth of total loss caused to diffcrcnt sectors was estimated around 1100 crore. Besides, it was decided to work out and estimate the mitigation measures for inclusion in final memorandum. Chief secretary Tripathy directed to prepare the final memorandum within 10 to 12 days.

A five member central team headed by Joint secretary ministry of home affairs Praveen Vasistha visited the State on 16th and 17th September 2020. The team divided itself to two sub teams. One sub team visited the districts of Bhadrakh and Jajpur and other sub team visited the districts of Kendrapara and Puri. The other members of the team were Dr Virendra Singh, director of rice development, Amrish Pal Singh SE Ministry of Jal Shakti, Saswat Mohapatra Dept of Road, Transport & Highways, and S.S,Modi, Ministry of Rural Development.

The Central team has praised the State government’s flood management.