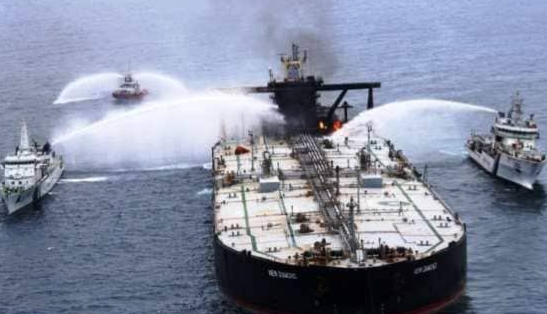 MT New Diamond, a very large crude carrier, On 3rd September 2020, caught fire off the eastern coast of Sri Lanka, resulting in the death of a Filipino crew member.  The ship, which was carrying 2.70 lakh tonnes of oil from Kuwait to Paradip Refinery near Paradip port on Odisha coast, was at that time about 65 kilometres east of Sri Lanka in the Sangaman Kanda Point. The ship was with 18 Filipino and five Greek crewmembers on board. The cargo was loaded on 23rd August 2020 at Mina al Ahmadi and was due to arrive at Paradip on 5th September. The ship was chartered for the voyage by the Indian Oil Corporation.

After burning intermittently for almost a week, the fire was reported to be extinguished by 11th September, 2020.
Indian Coast Guard’s timely action resulted in “No Oil Spill and minimal damage. It was indeed one of the biggest rescue operations in the maritime history of the world.