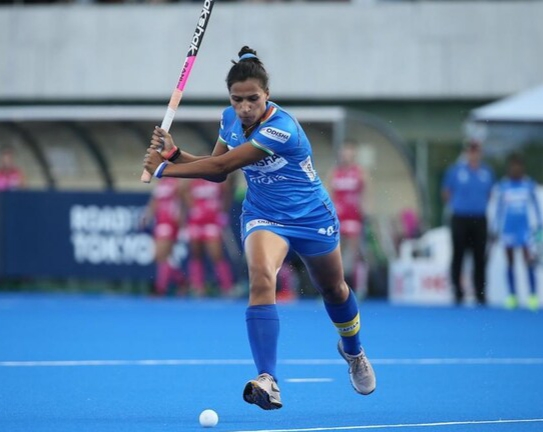 New Delhi: The Indian men’s and women’s hockey teams both of which are based out of the Netaji Subhash Southern Centre in Bengaluru have resumed their training after practice had been halted due to the nationwide lockdown imposed by the Coronavirus. The players are hopeful of returning to their best soon and are satisfied with the safety measures adopted at the centre.

Six players including captain Manpreet Singh on their arrival at the camp after taking a break were found to be Covid positive. They were provided all assistance and proper care at the SAI centre and empanelled hospital and are now back at training.

“I tested positive and when I returned back to training, we slowly started the procedures of getting back to play. The coaches have created a plan so that we gradually return to full momentum and I am really happy to be back practicing again,” said Manpreet. Proactive steps have been taken at the SAI centre to prevent further outbreak, where athletes are tested at arrival during their quarantine phase.

Indian men’s head coach Graham Reid said that the emphasis at the moment is on skill-based training focusing on individual basics which allows training to take place in small groups with social distancing. He added, “Using the SAI SOPs for various disciplines, we have been able to gradually increase the workload and intensity of the training to the point where we are able to have the majority of the squad up to pre-covid levels by the end of the next camp. This has been a slow and deliberate process designed to produce maximum output while minimising the risk of injury.”

The players are happy with the safety protocols that have been ensured for them at the SAI Bangalore centre, “It feels good that we have started training after such a long time and we are slowly bringing our body back to the same level which allows us to train the way we used to earlier. Alongside that, whatever safety protocols that are in place we are following that and we hope we return to our old form and rhythm in the next few months. But at the moment, it is important that we keep ourselves safe by following all protocols and train within them,” said Indian women’s hockey captain Rani Rampal.

Both the men’s and women’s hockey teams have qualified for the Olympics.