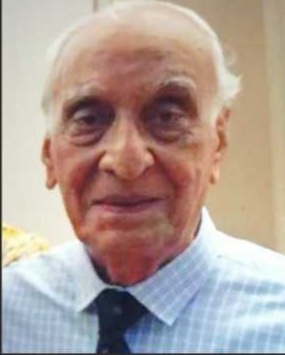 Bhubaneswar: Former Odisha chief secretary Dr B Venkatraman, a 1950 batch IAS officer, passed away on Tuesday. He was under treatment in Apollo Hospital, Delhi.

He was an Odisha cadre Ias officer and served in various capacities in different departments and had left foot prints in development of different sectors of Odisha administration
Dr.B.Venkatraman IAS (retd) an authority on Chola History and Architecture, was an IAS officer of 1950 batch ,who served as chief secretary Orissa and then as secretary, ministry of tourism and civil aviation. Adding to his distinguished career, was his special interest on Chola Art and History, inherited from his guru and father Padma Shri S.R.Balasubrahmanyam, an authority on this subject. Apart from being closely associated with professor Balasubrahmayam’s well known quartet on Chola temples, he co-authored, with his father the book “Later Chola Temples”.

He himself wrote the following books, “Laddigam “ (a later chola temple), “Temple art under the chola queens”. His magnum opus ‘RajaRajaeshwaram” -on the famous Tanjore Brihadeeshwara Temple – The pinnacle of Chola Art. His doctorate thesis was on the contribution of the Chola Queen Sembian Mahadevi.

He refurbished the Museum and Manuscripts Libraray at Bhubaneswar, apart from renovating and conserving among others , the earliest known structural temples in Orissa , Lakhmanesvar, Shatrughnesvar and Bharatwsvar.
He was collector erstwhile Boudh-Philabani and Keonjhar district and served departments like tourism and culture and home departments in Odiaha. He was the architect of Puri-Konark marine drive.