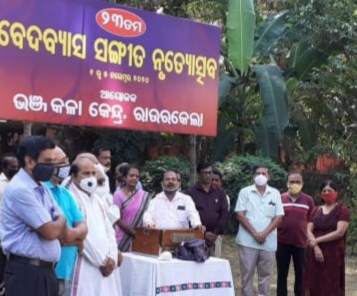 Rourkela: A symbolic function was organised to mark the 23rd edition of “Vedvyas Sangeet Nrutyotsav-2020”, organised under the aegis of Bhanja Kala Kendra, the cultural wing of Bhanja Cultural Trust and a leading Socio-cultural Organisation of Odisha.

The brief function attended by a small gathering of functionaries was organised in strict adherence to the Covid guidelines under the open air in front of the Golden Jubilee Monument.

The signature winter event which has ushered a cultural renaissance in the region and carved a niche for itself in the cultural firmament of India has to be curtailed this year in view of the pandemic.

The grand annual cultural fiesta is held every year from 1st to 5th November in which classical, folk dance & music exponents from across the country present their scintillating performances at the huge open-air-auditorium of Bhanja Bhavan. The festival is organised every year with support from the Central and the State government as well as SAIL, Rourkela Steel Plant and other corporate houses.

The function commenced with the presentation of ‘Bande Utkal Janani’ by the functionaries of Bhanja Kala Kendra led by Guru Binapani Rath. Thereafter a number of Odissi vocals were presented by the artists. Sasank Pattnaik coordinated the programme.