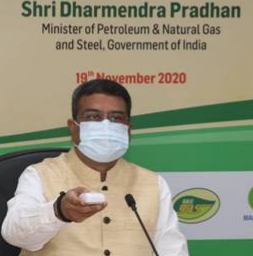 Speaking on the occasion, Pradhan said that a well-thought strategy is being implemented to take the country towards the gas-based economy. In this regard, gas infrastructure is being set up, in terms of laying of pipelines, setting up of terminals, enhancing gas production, introduction of simple and rational tax structure.

He said that LNG is going to be the fuel of the future for transport, and in this regard, retro-fitting of the vehicles as well as development by original equipment manufacturers is being undertaken.

The minister said that the LNG is not only almost 40% cheaper than diesel but also causes very less pollution.  He said that the Government will set up LNG stations at the distance of 200-300 km on golden quadrilateral, and within 3 years, we will have 1000 LNG stations on all major roads, industrial hubs and mining areas. He expressed confidence that 10% of the trucks will adopt LNG as fuel.

The minister said that clean and affordable fuel has become an instrument of welfare of people. He said that the Government will continue to promote CNG vehicles, Electric vehicles, Auto-LPG, but at the same time, LNG as long-haul fuel will be pushed. 20-25 MMSCMD equivalent LNG will come to the country, and cheaper LNG is likely to be available in the global market. He said that increased LNG consumption in the country will reduce the country’s dependence on crude oil.

The petroleum secretary, Tarun Kapoor, said that the government is making a long-term plan to promote LNG. The first trial of the fuel was started in 2015, and it is now ready to take off on the commercial scale. He expressed confidence that LNG’s use will increase and adopted for long haul trucks and buses.

These fifty LNG stations will be set up and commissioned in partnership by country’s oil and gas majors such as IOCL, BPCL, HPCL, GAIL, PLL, Gujarat Gas and their Joint Venture Companies and subsidiaries. Out of these 50 LNG stations, IOCL will set up 20 LNG Station, while BPCL and HPCL will set up 11 each LNG station. These 50 LNG stations are being put up at the nation’s Golden quadrilateral and major National highways where LNG is to be made available for heavy vehicles and buses.

Natural Gas, being an environment friendly clean fossil fuel, has potential to play a significant role in providing solutions to the environmental challenges as well as ever growing energy needs in a sustainable manner. Accordingly, Government of India has focused to promote the usage of natural gas as a fuel/feedstock across the country to increase the share of natural gas in primary energy mix from current level of 6.3 % to 15% by 2030.

LNG use in trucks can reduce SOx emissions by 100% and NOx emissions by 85% thus befitting society at large. Further, Heavy Duty vehicle segment is expected to grow significantly with increased highway development which is on-going across the country.LNG based truck operators can look forward to saving around Rs 2 Lakh per annum per truck which will result in higher upfront cost of LNG trucks being paid back in around 3 – 4 years. LNG as heavy vehicle fuel segment can also provide around 20-25 MMSCMD of new gas demand by 2035, and will be an important contribution towards our vision of 15% share of Natural Gas in India’s energy mix.