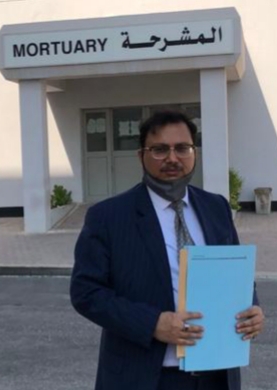 Bahrain: The mortal remain of Energetic & young Late Debasish Sahoo, who died here due to suffocation while working, will arrive at Bhubaneswar in Odisha on Friday.

Debasish Sahoo, aged 26, of from Bhadrak in Odisha had came here during 2016 to earn his daily bread and to repay the loan accumulated for the treatment of his late beloved mother who died due to cancer. He had never thought that he would never return to his motherland to meet his loving father.

The tragic death of 3 Indian migrant workers including Debasis Sahoo in Bani Jamra, Bahrain on 16th November 2020 in a man hole while carrying out maintenance job on behalf of the Employer -M/S CROWN ELECTROMECHANICAL SERVICES WLL.

While a high-level probe, ordered by the crown prince and new prime minister of Bahrain, corroborates the death certificate issued by the ministry of health, Kingdom of Bahrain dated 16/11/2020 – Cardiopulmonary Arrest due to Methane Gas Suffocation. The matter has been taken up with the alleged company by the Indian Embassy in Bahrin, Indian authorities and by Dr. Arun Kumar Praharaj , the Founder of Bahrain Odia Samaj who is a respected resident of Bahrain and social worker residing in Bahrain for more than two decades.

As per the investigation news reports gas detectors were not used at the site and the employees were not provided adequate safety measures such as oxygen mask with cylinder before carrying out the job which is a gross negligence on the part of the employer which led to the death of the innocent workers.

Dr. Praharaj had raised this issue with the authorities and requested Indian Embassy in Bahrain, union minister Dharmendra Pradhan, Odisha chief minister’s office, BJD Rajya Sabha member Dr. Sasmit Patra and Arup Pattanaik Convenor of Odisha Mo Pariwar for intervention for the delivery of speedy justice to the victim and victims family. He has demanded;

Dr. Praharaj said, the Company has agreed to remit the settlement and terminal benefits BD 1496/- (Rs.2.84 lakhs). Insurance Claim from General Organisation of Social Insurance (GOSI) , Government of Bahrain is being actively followed up and would be settled Soon as communicated by the company HR Manager.

Dr. Arun Kumar Praharaj has thanked all concerned authorities including Dharmendra Pradhan, the Indian Ambassador Piyush Srivatava, Dr. Sasmit Patra and Arup Patnaik for their cooperation and support in this matter.