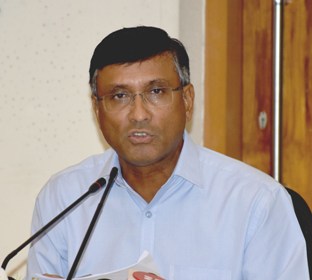 Bhubaneswar: Odisha is going to promote rice bran oil extraction units in the State. For this the chief secretary Asit Tripathy had directed for a study of availability of rice bran and demand assessment of rice bran oil.

This was known from a high level review meeting held under the chairmanship of chief secretary Asit Tripathy on virtual mode from Lokseba Bhawan recently wherein principal secretary MS&ME Satyabrata Sahu outlined the issues for discussion.

Rice bran, once considered not of much use beyond cattle feed and fuel in Odisha is emerging as a boon for farmers because of agri-technology popularization initiatives of government.

Considering the potential for production of rice bran oil in Odisha, chief secretary Tripathy directed for promotion of small and medium enterprises in this sector.

Tripathy said, “Since rice bran oil contains immune supporting nutrients and unsaturated fat, it can be developed to an attractive enterprise for young entrepreneurs”. He added, “Proper assessment of the market demand and economy involved in the trade will be a reliable guide for the young entrepreneurs”.

Outlining the Covid response revised policies, principal secretary Sahu said, “Incentives like interest subsidy @ 5% per annum for 5 years on term loan from the date of commercial production, 75% net SGST reimbursement for 5 years up to the limit of 100% investment on plant and machinery, exemption of electricity duty up to contract demand of 500 KVA for 5 years, assistance for quality certification, employment cost subsidy and technical knowhow now available for the sector”.

Director Industries Reghu G. appraised, “As of now 12 rice bran units are operating in the State. Out of these seven are in Bargarh district, two in Koraput district and one each in Balasore, Jajpur and Khordha district. A total of Rs.1115.34 lakh incentive/subsidy has been provided to the eligible units.”
Asst. director industry M.M. Patra said, “This type of enterprise is quite rewarding. Around 800 milligram of healthy edible oil can be extracted from the bran generated from one quintal of paddy”. This oil is sold at higher price in market than that of the normal refine oil. There is potential for more such units through local entrepreneurs in paddy rich districts.