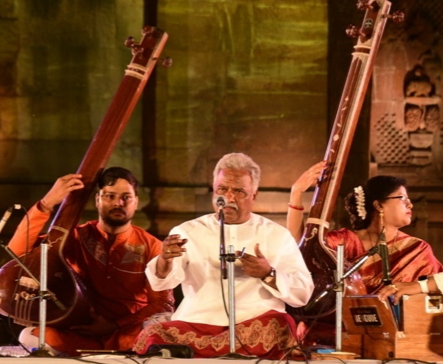 Evening’s second programme was Hindustani vocal by Pandit M. Venkatesh Kumar who presented Rag Kalyan Bilambit followed by Rag Durga Madhyalaya and lastly some remarkable Bhajans. His programme was marked with step-by-step elaboration in Bilambita and Drutalaya giving scope for vocal embellishments, simpler and softer movement from one note to other. While executing intricate tans and sargams, their wide ranging mellifluous voice, combined with masterly command over the technique, translated their highest flight of imagination into sublime music. He was accompanied on Tabla by Keshab Joshi and on harmonium Satish Koli.