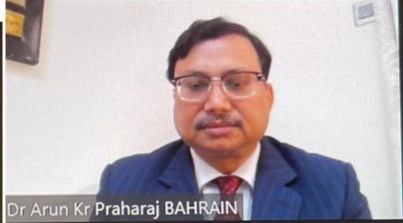 Dr. Praharaj has been appointed as chairman of Vishva Odisha International Council. Dr. Adrish Bramhadutta, founder of Kalinga Mitra Samaj, has been nominated as secretary of the Council

A ardent devotee of Lord Jagannath, Bahrain based Dr Praharaj is the founder of Odia Samaj in that country. As a true representative of Brand Odisha, he has dedicatedly promoted Odisha in Bahrain. He has played a memorable role in helping out Odias stranded in Bahrain during the global lockdown following the breakout of the pandemic.

Odisha State Assembly speaker Surya Narayan Patro, who is the president of Vishva Odisha has given the Goodwill Ambassador appointment letter to Dr Arun under his signature.

As per the suggestion of the speaker Patra, to make this year’s programme more vibrant and progressive, Goodwill Ambassadors were appointed for 21 different countries of the world, so that they can establish and promote the goodwill of Brand Odisha and exchange developmental programmes in their respective countries.

Vishva Odisha is a global campaign to preserve and promote the richness of Odisha in the world.