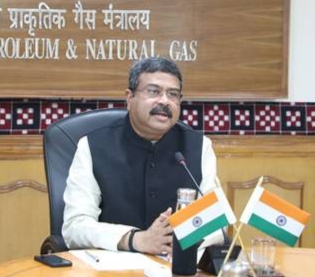 New Delhi: Union steel minister Dharmendra Pradhan Wednesday said that Production linked scheme (PLI) has been announced for the specialty steel by the government and this is a major reform in the sector for boosting the indigenous production. Inviting the industry to take full advantage of this path-breaking initiative, the minister called upon for developing a new manufacturing ecosystem in the country.

Speaking at the 58th National Metallurgists Day and at the 74th Annual Technical Meeting of the Indian Institute of Metals(IIM), described the Budget 2021 as path-breaking, progressive and pro-growth. He said that it provides unprecedented focus on infrastructure creation for future. He said that this will certainly result in increased demand for steel. Investments in core sectors like railways, roadways, and petroleum and natural gas, which have the potential for spurring demand for metals, has seen a healthy increase across the board.

The union minister said metals and mining sector can play an important role in the making of an Aatmanirbhar Bharat. He said that  this is a vibrant and growing sector, and it holds tremendous amount of potential and promise of growth not only for the sector but for the economy as well.

Talking about Aatmanirbhar Bharat, he said that it does not mean an India which is isolated. Aatmanirbhar Bharat envisions grand, vibrant India, which does not only fulfil its requirements but also meets the expectations of the global community in the true spirit of Vasudhaiv Kutumbukam. He said that Hon’ble Prime Minister Shri Narendra Modi from the temple of Indian democracy talked about the importance of wealth creators. “If the industry, Government, and academia all work together for the betterment of our society and nation, we can surely realize the vision of an Aatmanirbhar Bharat.”

Pradhan said that coming out of the COVID-19 pandemic, we are gradually moving towards more promising times. The past year was a test of our determination and what the country can do with collective efforts. He said that while dealing with the pandemic and ensuring the welfare of the poor is taken care, Honorable Prime Minister made a clarion call of building an Aatmanirbhar Bharat.

The Minister said that there is a need to develop intellectual property and technology in the areas of advanced steels and alloys, so that the critical requirements are satisfied indigenously, and the export horizon expands. He said that the role of the R&D establishments and academic institutes in generating intellectual property and technologies is vital. “We are also working to create world class facility for metallurgical engineering and development of human resources for the steel sector. Centers of Excellence have been approved to be set up in IITs. Steel Research and Technology Mission of India has been set up to promote joint collaborative research projects of national importance in iron and steel sector.”

Congratulating the IIM for its platinum jubilee, the minister said that it is a matter of pride that an institution, which was established in 1946, before independence of India, is still flourishing and contributing to the development of the country. He said that by creating an excellent spirit of collaboration, partnership and synergy between the three pillars of industry, academia and R&D, IIM has played an important role in the journey of India metallurgy and contributed immensely to nation building.  He called upon the IIM to play a key role in developing technical acumen, bringing in innovation, developing skilled manpower in the steel industry. He urged for enhancing the existing strategy for indigenization and innovation to substantially enhance contribution to “Atmanirbhar Bharat”.