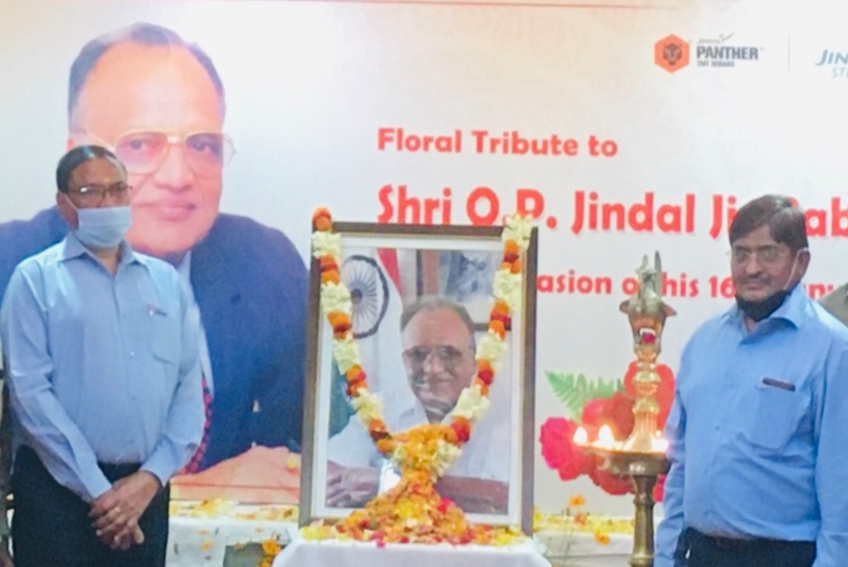 Barbil: Jindal Steel and Power Ltd (JSPL) observed the 16th punyatithi of its founder Om Prakash Jindal at the pellet plant premises on Wednesday. Following strict Covid guidelines, a series of programmes were organised to commemorate the day.

Barbil plant Head Shri Brij Badhadra paid floral tribute to the great soul along with other department heads and colleagues.

Remembering the founder of OP Jindal Group, who is also fondly called Bauji, Shri Badhadra said, “ Om Prakash Jindal Ji will always be a role model for all the industries. His focus on nation-building through industrialization and the skill development of youth will always be remembered. He is a real hero, who became one of the leading industrialists of the country from a very humble beginning and continued to work for the downtrodden”.

Earlier in the morning, puja and havan were conducted to mark the occasion. Later, the Bhagavad Geeta recital programme was also organised in the township with the participation of employees and their family members in virtual mode. Besides, school bags and food packets were distributed at Adruta Children Home orphanage in Keonjhar.

OP Jindal is not only known as a business leader and industrialist of India but also he is famous for his social service activities. He was serving as a Minister of Power in the Government of Haryana at the time of his death. He has also a Member of Parliament to 11th Lok Sabha.

Employees of JSPL’s Bhubaneswar Office also paid their homage to the Founder of the Group. In his tribute to the Founder Prashant Hota, President and Head of Bhubaneswar Office and Hervinder Singh, President said that the genesis of ‘Make in India’ and Aatmanirbhar Bharat can be traced back to the path-breaking contribution of Shri OP Jindal to the industrial development of India. JSPL Foundation also distributed food material among needy senior citizens and specially-abled children.