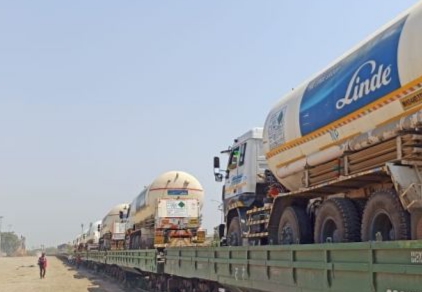 New Delhi: Linde India has imported 24 cryogenic containers to facilitate transportation and supply of liquid medical oxygen (LMO) to defict States. The containers have arrived in the eastern part of the country.

As India’s second wave of Covid-19 pandemic continues to escalate rapidly, existing supply chains are under enormous pressure in meeting the huge demand, specially to the most impacted parts of the nation.

To respond to the national urgency, Linde India have joined hands with Tata group and government of India (GoI) to undertake measures to augment the availability of LMO across the country.

In one such measure to bolster the delivery infrastructure for medical oxygen, Linde India in partnership with Tata group have secured 24 cryogenic containers for carriage of medical oxygen from international sources. These containers have arrived by airways to Eastern part of India, from where Linde would be transporting them to their Liquid Oxygen manufacturing facility. At the Linde facility, these cryogenic ISO containers, would be conditioned and certified for liquid medical oxygen usage.

Each of these containers, which can carry up to 20 tons of Liquid O2 – will be used by Linde to pick-up oxygen from various manufacturing facilities and deliver it to hospitals where required. These ISO containers can also act as interim oxygen storages in remote areas which are facing oxygen scarcity.

A big thank you to Government of India and the Tata group for their life saving activities.

Since the onset of the pandemic, Linde has been committed to finding innovative solutions and partnering in ventures that enable faster supply of medical oxygen. From partnering with government of India to airlift cryogenic road tankers from Delhi for filling liquid oxygen at Linde’s oxygen plant in Durgapur and get the much-needed medical oxygen to Delhi to working with Indian Railways to ferry empty tankers on the ‘Oxygen Express’ from Kalamboli, Maharashtra to Vizag, where the tankers will be filled with liquid oxygen and sent back to Maharashtra.