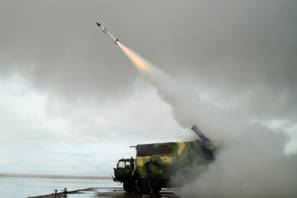 Chandipur-on-Odisha coast: Defence Research and Development Organisation (DRDO) conducted a successful flight-test of new generation Akash (Akash-NG) missile from Integrated Test Range, Chandipur off the coast of Odisha at 1145 hrs on July 23, 2021. The test was carried out against a high-speed unmanned aerial target which was successfully intercepted by the missile.

The system performance was validated through the data captured by a number of Radar, Telemetry and Electro Optical Tracking systems deployed by ITR, Chandipur. A team of Indian Air Force Officers witnessed the test.

On July 21, 2021, the missile was successfully flight-tested without seeker meeting all the mission requirements.

Union defence minister Rajnath Singh has congratulated DRDO, Indian Air Force and the Industry on the second successful flight test of Akash-NG in a span of three days. He said the development of this state-of-the-art missile system will prove to be a force multiplier for air defence capabilities of Indian Air Force.