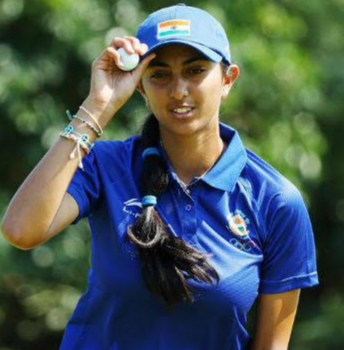 Bhubaneswar: After four days of intense toil and concentration from the player and the anxiety and hope of a billion plus people for a medal, it was heart breaking to see two carts driving away on the fairway carrying two competitors (as in picture) for medals that did not have Aditi Ashok on either.

Elation and heartbreak is part of any sport for players, spectators and fans in equal measure but when it is the Olympics the story is more engrossing for it involves millions of people who may not know the players or understand the game. Thanks to Aditi, crores of Indians have just been exposed to the sport of Golf which for many used to mean an idle pursuit of rich people with plenty of leisure.

From the number of inquiries I received from friends and acquaintances over the past few days when Aditi came to medal contention, I realised how little general people know about competitive sports in general and Golf in particular. I would attempt here to explain a few nuances of this sport so that the uninitiated get a better and greater perspective.

Golf is a game that is played on specially designed landscapes of 18 stretches of plot, which you may assume as a court or field of other games, that start from a tee-off area where you hit the ball for play that ends at a designated hole on a green treacherously designed and hideously located on it. The Course is designed with varying lengths creating tricky visual deceptions, slopes, undulations, sand and grass bunkers, water bodies, heights and drops and various types of bends per hole. Obstacles are created further through four kinds of special grass, many trees at strategic locations, bushes, natural outgrowth etc. The general idea is to make it difficult for players to hit the ball from one point to another with ease. Pars are allocated depending on the length of the hole and impediments designed on it which decides whether a particular hole will be three, four or five pars. If a player puts the ball in the whole below the designated par the score is under par and if more then above par. That apart players have to contend with the soil, altitude, wind and weather conditions while playing. Courses very close to sea shores like the Scottish Links are very hard to negotiate because of high wind and frequent rains.

So the lazy, benign looking game of Golf which looks like a picnic to general public is an incredibly difficult game. It’s a game where no opponent prevents you to do what you want to do, except perhaps psychologically in match situations. You play the game against yourselves and of course the Course. Tournament stroke play golf is played over four days over 72 holes 18 each day. You are allowed no more than 14 Clubs in your bag to play the game using specific Club for specific purposes with the flat head putter to use on the green to put the ball in the hole.

The tournament is like 72 matches or attempts by a player over four days where the playing duration would be no less than 20-24 hours not counting the play off as the one seen in this Olympic to decide silver and bronze. The gross playing time of no individual outdoor game could be longer than this. In a tennis tournament even if a player takes five sets in each round to win, it is difficult to involve that long a time.

Thus a golfer has to maintain intense focus and concentration over four days taking utmost care over more than 260 shots with various clubs to complete a golf tournament. You may use your bat, racket or stick to play more number of shots in Cricket, Tennis, Badminton, Hockey or other court games, but you do that with no change of equipment and space of play. You play golf with different sticks as required and those sticks are the most crocked of equipments ever designed for any game!

The idea of match play Golf for four continuous days over 72 holes is roughly akin to a sprinter, a jumper, a swimmer, a thrower, or any other court player playing 72 matches against the same opponents over four days and that too on varying fields and arenas not to mention the weather conditions involving heat, humidity and rains that substantially alter the conditions of ground, grass, sand and the putting surface. This is like a batter or bowler playing on 72 surfaces in the same match! People should appreciate then that tournament Golf is no stroll in the sun.

That said let us come to Aditi. A young golfer from a country with very little pedigree in the game and less so in women category, ranked around 200 in the World, just starting a fledgling career in the US circuit, comes to the Olympics and stands toe to toe with the highest ranked players for four incredible days over 72 intensely competitive holes. She keeps iron determination and discipline right till the end to fall short of a medal by only one stroke. In the process she captures the imagination of a huge nation and compels millions to learn more about the game.

Golf is among the highest paying sports in the world presently as its earning opportunities has well passed Tennis for many years. Many of her competitors in Tokyo are incredibly richer than Aditi. In tournaments her father carries her bag and here in the Olympics it was her mother for the father was unavailable. She was deprived of crucial advice and consultation from the Caddy which is such an important part of the game. Some caddies are as important as the players as they are kind of walking coaches by the players’ sides. Many famous caddies are millionaires as they receive between 10 to 20 per cent of the player’s earnings. Aditi stood on her own under the intense pressure of Olympics and finished just short of a medal, incredibly same as the mighty Rory McIlroy with his standing in the game. Olympics are a special ball game where even the mighty Djokovic fails to win a medal. Put in this context Aditi’s has been the standout performance by India along with that of its women hockey team. The difficulty quotient in their cases was mind boggling but they almost made it. They lunged their best to touch the medal but just about failed to grasp it. There is more excitement and pleasure in the lunge than may be the grasp. As per Aditi, with her skill set and temperament she has immense opportunity to be a top player in the world and top earner on the US LPGA circuit she has recently joined. And she will have the nation’s goodwill with her.