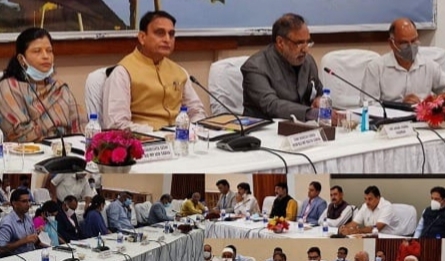 Srinagar: As many as 13 Indian Parliamentary Standing Committees are in Jammu & Kashmir this month. The Committees are having their meetings in Srinagar, Jammu and Leh.

Soon after the announcement of adjournment sine die of both Lok Sabha and Rajya Sabha ahed of schedule due to pandemic situation in both houses, over 200 MPs decended on Kashmir to participate in their respective Parliamentary Committees.

Lok Sabha speaker Om Birla was delighted to meet as many as 25 MPs in Ladakh during his two day visit to the newly carved out Union Territory.

The MPs found the Committee meetings to be very rigourous. They had to sit whole day in the meeting. Some time they had to skip lunch. Site seeing become difficult due to tight schedules.

Particularly, Parliamentary Committee on home chairman Anand Sharma was proved to be a hard task master.