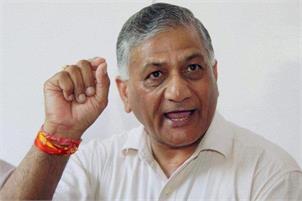 New Delhi: Union minister state for civil aviation retired general VK Singh told the Rajya Sabha on Monday that 53 airports in the country have been included under Krishi Udan Scheme.

Singh, giving a written reply to the House, said a otal of 1,08,479 tonnes perishable cargo, both international and domestic, was handled in financial year 2021-22 (till 28 Feb., 2022) in comparison to 84, 042 tonnes handled in financial year 2020-21 at AAI airports. Krishi Udan is an ongoing Scheme and  is reviewed from time to time in consultation with stakeholders.

Krishi Udan Scheme was launched in August, 2020 on international and national routes to assist farmers in transporting agricultural products so that it improves their value realization. Krishi Udan 2.0 was announced in October, 2021 enhancing the existing provisions, mainly focusing on transporting perishable food products from the hilly areas, North-Eastern States and tribal areas.

Krishi Udan is a convergence scheme where eight ministries/departments namely Ministry of Civil Aviation, Department of Agriculture & Farmers’ Welfare, Department of Animal Husbandry and Dairying, Department of Fisheries, Ministry of Food Processing Industries, Department of Commerce, Ministry of Tribal Affairs, Ministry of Development of North Eastern Region (DoNER) would leverage their existing schemes to strengthen the logistics for transportation of Agri-produce. There is no budgetary allocation for the Scheme.

Under the Scheme, facilitating and incentivizing movement of Agri-produce by air transportation by full waiver of Landing, Parking, Terminal Navigational Landing Charges (TNLC), and Route Navigation Facility Charges (RNFC) for Indian freighters and Passenger to Cargo (P2C) at selected Airports of Airports Authority of India, primarily around 25 airports focusing on NER, Hilly and Tribal region and 28 airports at other areas have been inclued.