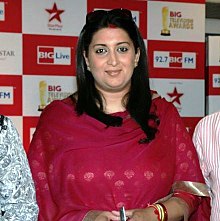 New Delhi: Union women & child development minister Smriti Irani Wednesday told the Rajya Sabha that out of Rs. 6212.85 crore (including Rs.500 crore allocated to the ministry of women and child development in the financial year 2021-22) allocated under Nirbhaya Fund, an amount of Rs. 4366.89 crore has been disbursed/ released by the concerned ministries/ departments for implementation of various projects/ schemes.

Replying to a question of memer Mamata Mohanta, Smriti Irani said, an amount of Rs.26.54 crore and Rs. 28.31 crore have been disbursed/ released to the States of Odisha and Bihar respectively, under Nirbhaya Fund for establishment and management of One Stop Centers in the States.

The projects/ schemes under Nirbhaya Fund are demand driven. The projects/ schemes appraised by Empowered Committee (EC) under the Framework for Nirbhaya Fund are having staggered implementation schedule. Further, some of the appraised projects are directly implemented by Central Ministries/ Departments. However, majority of the projects are implemented through State Governments/ Union Territory Administrations in which Central Government releases the funds to States/ UTs as per prescribed fund sharing pattern of respective projects/ schemes. Implementation on the ground is done by the States/ UTs as per the approved implementation period. There are schemes, which require recurring expenditure for providing services, in respect of which, further funds are released upon receipt of Utilisation Certificates (UCs) and Statement of Expenditure (SoE) from the Implementing Agency/ authority. The UCs are required to be submitted within twelve months of the closure of financial year, in which grant was released. Hence, it is possible that more funds have been actually utilised, but Utilisation Certificates (UCs) and Statement of Expenditure (SoE), as required as per provisions of General Financial Rules (GFR) have not been submitted by the concerned States/ Implementing Agencies (IAs). The States/ IAs are regularly followed up to submit UCs and SoEs. Various other factors such as time taken in getting required approvals from competent authorities, procedure to be followed for award of contract, disruptions due to unforeseen reasons such as the one created by the Covid 19, etc., also affect implementation of schemes/ projects.

An Empowered Committee (EC) of Officers constituted under the Framework for Nirbhaya Fund appraises and recommends proposals for funding out of Nirbhaya Fund. The EC also reviews the status of implementation of schemes/ projects under Nirbhaya Fund, from time to time, in conjunction with the concerned Ministries/ Departments/ Implementing Agencies. Further, monitoring and reviewing is also done at the level of State Governments/ UT Administrations / Implementing Agencies in the course of implementation.