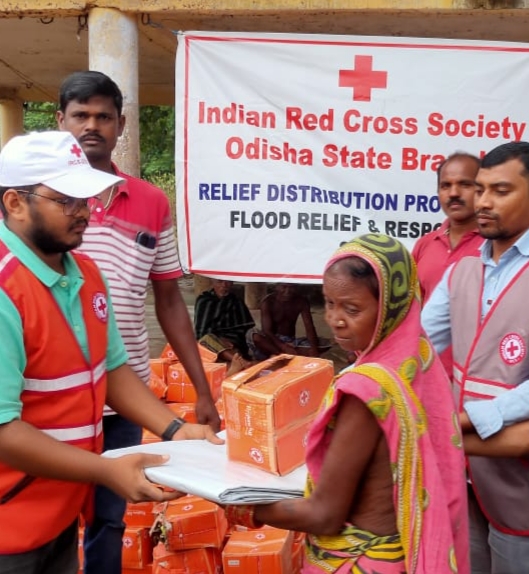 Bhubaneswar: The Odisha State Branch of Red Cross Society of India has fanned out volunteers with relief materials in flood affected areas of the State.

The Odisha Red Cross under the leadership of its secretary CTM Suguna has been distributing hygiene kits in flood affected marooned areas in Banki block in Cuttack district and Delang blocks in Puri district.

Secretary Suguna told India Whispers that the Odisha Red Cross dispatched 1000 tarpaulins, mosquito nets, hygiene kits, buckets, mugs, soaps and towels each to Banki and Kanas blocks. Besides the above, 3 quintals of flattened rice, sugar and 1000 packets of biscuits to Pipl/ Delang.. These were distributed through Sandhyarani Pradhan, Chairperson OSCPCR.

According to her,1008 packets of biscuits, 960 packets of amul spray for children, 500 each of hygiene kits, buckets, towels and mugs to Boudh sent Boudh district.

Another truck has been loaded for Nimapara and GOP with 1000 tarpaulins, mosquito nets, buckets, mugs, hygiene kits and towels, she added.