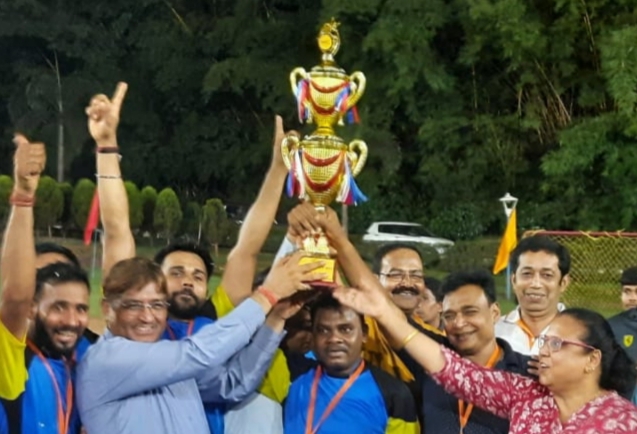 Joda/Barbil: The 1st edition of the ‘JSP Futsal Championship Cup’ was organized at the Eden Garden Playground of Jindal Nagar, Barbil Pellet Plant.  The finals was held in between KGF Warriors (Maintenance Department) and Black Panthers (Operation Department) in presence of an enthusiastic audiences of the township.

The final match of the tournament was graced by the Unit Head, Shri Brij Badhadra and Head, HR & ES, Shri Sarat Kishore Panda as the Chief Guests along with the senior officials from various departments, employees and their family members.

In a thrilling and competitive final match both the teams played exceptionally well by putting their best performances. But, by riding the fortune of the day, KGF Warriors emerged as the winner by scoring 8 goals to 1. The game was supervised by Shri Ajay Ekka as referee.

The winners, KGF Warriors team received the ‘JSP Futsal Championship Cup 2022’ from the chief guest Badhadra in a splendid function followed by the final matches.

In his message, the Head – Pellet & Iron Ore Business Ashis Pandey said, “Congratulations to KGF Warriors for winning the championship and all the teams for participating in the tournament. My best wishes for their future endeavours in life and workplace. Always have faith in yourself and have courage to win any challenge that comes your way.”

Speaking at the award giving ceremony, Badhadra said, “Like business, futsal is a team game. Team spirit and hard work always bring success. I congratulate all the teams, organizers and the audiences for making the tournament a grand success. Congratulations to KGF Warriors for becoming the winner. And my special thanks to Sri Panda and his entire team for organizing such a fantastic event in the unit.”

The championship was organized by the HR & ES Team under the leadership of Shri Panda with an objective of Employee Engagement and Work-life Balance.