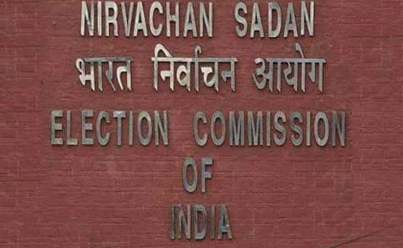 New Delhi: In continuation of the earlier action initiated on May 25, 2022 for enforcing due compliances by Registered Unrecognized Political Parties (RUPPs), the Election Commission of India led by chief election commissioner, Rajiv Kumar and election commissioner Anup Chandra Pandey today further delisted 86 non-existent RUPPs and declared additional 253 as ‘Inactive RUPPs’. This action against 339 non-compliant RUPPs takes the tally to 537 defaulting RUPPs since May 25, 2022.

As per statutory requirements under section 29A of the RP Act, every political party has to communicate any change in its name, head office, office bearers, address, PAN to the Commission without delay. 86 RUPPs have been found to be non-existent either after a physical verification carried out by the respective chief electoral officers of concerned States/UTs or based on report of undelivered letters/notices from Postal Authority sent to the registered address of concerned RUPP. It may be recalled that ECI had delisted 87 RUPPs and 111 RUPPs vide orders dated May 25, 2022 and June 20, 2022, thus totalling the number of delisted RUPPs to 284.

This decision against 253 non-compliant RUPPs has been taken based on reports received from Chief Electoral Officers of seven states namely Bihar, Delhi, Karnataka, Maharashtra, Tamil Nadu, Telangana & Uttar Pradesh. These 253 RUPPs have been declared inactive, as they have not responded to the letter/notice delivered to them and have not contested a single election either to the General Assembly of a State or the Parliament Election 2014 & 2019. These RUPPs have failed to comply with statutory requirements for more than 16 compliance steps since 2015 and are continuing to default.

It is also noted that of the above 253 parties, 66 RUPPs actually applied for a common symbol as per para 10B of the Symbol’s Order 1968 and did not contest the respective elections.  It is pertinent to note that privilege of a common symbol is given to RUPP based upon an undertaking for putting up at least 5 percent of total candidates with regard to said legislative assembly election of a State. Possibility of such parties occupying the available pre-election political space by taking benefits of admissible entitlements without contesting elections cannot be ruled out.  This also tends to crowd out the political parties actually contesting elections and also creating confusing situation for the voters.

“Declares that party must contest an election conducted by the Election Commission within five years of its registration and thereafter should continue to contest. (If the Party does not contest elections continuously for six years, the Party shall be taken off the list of registered parties).”

The Commission is cognizant that compliances of the birth conditions, which are a combination of mandated and self-acknowledged provisions, are sine qua non for maintaining financial discipline, propriety, public accountability, transparency. The compliances work as the building blocks of a transparency mechanism for informing the voters of the affairs of the political parties necessary for making informed choices. In the absence of required compliances, the electorate and the Election Commission get blindsided. Further all these stated regulatory requirements have direct bearing on the Commission’s constitutional mandate of conducting free, fair and transparent elections.

In view of the foregoing, immediate corrective measures are warranted in larger public interest as well as for the purity of electoral democracy. Therefore, the Commission, in discharge of its mandate of ensuring just, free, fair & transparent electoral process hereby directs that: