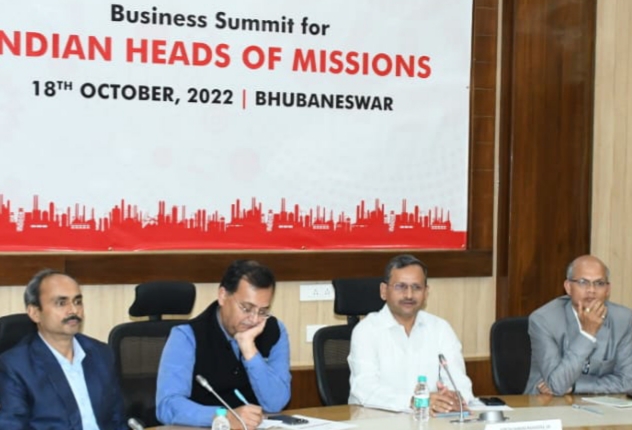 Sharma outlining objectives of their visit and the Business Summit of Odisha with them, expressed the hope that Indian Mission Teams would adequately present Odisha at international business forums. Senior officers from different departments along with representatives from various industry associations joined the deliberations on the further growth of Industries in Odisha.
Addressing the Summit, chief secretary Mahapatra said, “Odisha is growing to a major industrial hub in Eastern India. We have attracted investments in the mineral, metallurgy, chemicals, petrochemicals, textiles, apparel, food processing, IT and ITeS sectors” He further said, “In the last months, chief minister Naveen Patnaik has led delegations to Dubai, New Delhi, Mumbai, Bengaluru, Hyderabad for road shows and investors’ meets as a part of ensuing Make in Odisha Conclave-2022. Everywhere I have seen high excitement about Odisha among the investor and business community”. Mahapatra expressed the hope that with “involvement of the Heads of Indian Mission in different countries we can increase our presence in the global market”.

Concluding the interactive session, Ambassador Patnaik said, “During last two days we have taken exhaustive tours to different developmental clusters in Odisha. The field tour shows that Odisha is growing very fast. He suggested that we would be more aggressive in popularizing the resources of O“Our field visits during last two days,” said Ambassador Mohapatra “showed that Odisha is on a futuristic trajectory”. Heads of Indian Mission would extend all its engagements for enhancing exports from Odisha.
It may be pertinent here to mention that the Mission visited the Maniabandh Textile Cluster in Cuttack and discussed with members of various weavers’ cooperative societies. They went to Dhenkanal to see the programs being implemented under “aspirational district program”. They visited the BB High School, Dhenkanal, and looked into functioning of the new smart classrooms and e-learning facilities etc installed under high school transformation programme of the State. The team also visited the cashew cluster in Mahisapat, and Dokra artisans in Sadeibareni of Dhenkanal district. On second day of the visit, the Team went to Sea Food Park at Deras, World Skill Centre at Mancheswar and Kala-Bhoomi at Pokhariput.. They appreciated the ‟ best-in-class infrastructure” being developed in Odisha. In the evening, they held elaborate discussion with the senior officers and industrial associations of Odisha in the business summit.