Bhubaneswar: The twin sisters-Radhika and Doodica– were the first Odias to perform in the international shows. The Siamese twins had performed in the Barnum and Bailey Circus  that toured various countries in Europe and US.

Archival documents in possession of Anil Dhir, a research scholar who works on the history of

Odisha, clearly establishes that much before Barrister Madhusudan Das popularly known as Utkala Gaurav Madhau Babu, the twin sisters had visitedBilayat.  In popular history, it is said that Barrister Madhusudan Das was the first Odia who sailed to England. In April1897, he sailed from Kolkata to raise his demands for the interests of Orissa before the British government.

“However there are many references of Odia marinerswho sailed on English and Dutch ships as early as 1790”, says Anil adding, “Some unverified Christian missionary accounts also speak of converted Odias who were sent to foreign lands.”

The earliest confirmed account of Odias in England and America is of the Siamese twins Radhika and Doodica, popularly known as the “Orissa Twins”, claims Anil . “There are various newspaper accounts of these twins having toured the Americas, Europe and England”, he asserts . According to him, the sisters had a decade long stint, exhibiting themselves as freaks in different exhibitions.

Dhir has dug information from the shelves of the archives to prove that the Orissa Twins are the first Odia performer in the international arena.

The twins were born in 1888 to Khestra Nayak of Haopara village in Dhenkanal District. For the poor parents, the deformed kids were a liability. Moreover the birth of these conjoined twins was seen by the superstitious villagers as a symbol of divine wrath. The family was ostracised by the community and in sheer desperation the father tried to forcefully separate them. However some local officials preven 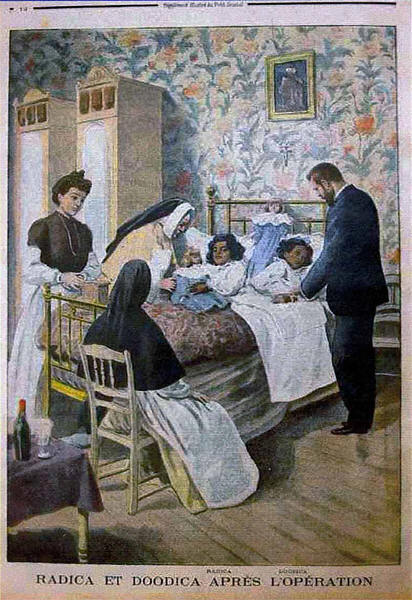 ted him and the local Mahima sadhus took them under their protection. It was they who named the girls Radhika and Dudhika.

Word of the freaks got around and was reported in the English press in 1892. London showman Captain Colman sent his agent to Odisha, who convinced the monks to hand over the twins for their better treatment. There is even proof that an Odia lady, probably an aunt, accompanied the twins. They sailed for the Americas to take part in the Chicago Fair of 1893, after stopping for a week in London. The British Medical Journal carried a report on the twins in its on June 1893 issue, citing “the two little girls, nearly four years old, are apparently perfect in every respect, except that from the ensiform cartilage to the umbilicus they are united together”.

They were a big draw at the Chicago Fair and this drew the attention of P.T.Barnum of the famous Barnum and Bailey Circus. They twins were soon a part of the “The Greatest Show on Earth.” The sisters were shown on colourful posters and postcards as the “Orissa Twins” or “Hindu twins”, and were  bigcrowd pullers wherever the shows went. There were stories about the twins in magazines and newspapers, which portrayed them as exceedingly handsome, charming and vivacious young ladies.Captain Colman treated the girls as an adoptive father and the girls were happy with each other. They learnt English and travelled all over Europe and the USA.

In 1902, while in France, Doodica developed tuberculosis. With the hope of saving Radhika, Dr Eugene Louis Doyen, the famous surgeon of France and a pioneer scientific film maker, did the separation surgery on February 9, 1902.He filmed the twins’ surgery and showed is as “La Separation de Doodica-Radica”. Sections of Doyen’s film were part of the 1995 BBC documentary series “The Last Machine”. The operation was a failure as Doodica diedjust seven hours after the surgery. Radhika too did not live long; she passed away after a few months. Dr. Doyen’s operation has stirred up a controversy among the medical fraternity of the time.  Both the sisters were given secret burials in Paris. Nothing was known about them until Thierry Lefebvre, wrote about them in his  2004 book titled  “Flesh and Celluloid: The surgical cinema of Dr. Doyen”.

“Few in Odisha know of them, there are no archival accounts of the twins who had toured the World a good four years before Madhu Babu stepped ashore,” says Anil.