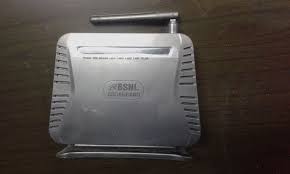 The BSNL offices across the country are now loaded with queries about the malfunctioning of the modelm. BSNL engineers are now busy debugging the affected modems  and loading anti-virus softwares.

A senior computer engineer of BSNL told India Whispers that the malware has been implanted in the modems supplied by BSNL by using default password by some rival telecom companies to spoil the market of the national telecom entity. Involvement of mischievous elements also could not be ruled out, the engineer said.