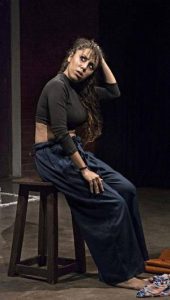 A Scene from The Playwright is Dead

Mumbai : The Hindu Playwright Award 2017 went to In Search of Dariya Sagar, a play written by Gerish Khemani and Akshat Nigam. The duo was presented Rs 2 lakh cash award at the 13th edition of The Hindu Theatre Festival, organised by the The Hindu newspaper in Chennai.

The Plywright is Dead by Deepika Arwind and 1947-The Man From Lahore by K. Madavane were shortlisted among the best three scripts out of the 183 entries received for the competition. The jury were Arshia Sattar, eminent author and translator, Keval Arora, English professor of Kirorimal College of Delhi University who teaches drama, and Sinil Shanbag, well-known theatre director and documentary filmmaker.

The award instituted in 2008 to reward the best new unpublished and unperformed play-script in English.

In Search of Dariya Sagar is based on the Sindhi experience of the partition. According to the playwrights, there is more to the story than the Sindhis were willing to share.

“’In Search of Dariya Sagar’ is a play that brings together public events and private lives, political history and personal memory, in a manner that resonates both the real and the magical. Set firmly in the present, it is tied to the past with threads that are alternately made of steel and gossamer. The play draws its narrative sustenance from the portrait of a small displaced community, challenging the stereotypes in which it is cast. And it seeks its dramatic arc from dreams, ghosts and restless spirits. Bringing these elements together, the playwrights create the possibility of a rich and full theatrical experience.” This was citation by the jury while selecting In Search of Dariya Sagar as the best playwright of the competition.

Gerish and Akshat, who have been quite active in theatre in Mumbai, have been focussed on creating meaningful works. The duo wrote Error 404: Life Not Found, in which two men recall their experiences with one-third of their lives behind them. Ripples, written by Gerish and Harsh Desai, is a heartfelt play which is about education in rural India.