By Our Legal Correspondent

Bhubaneswar: The observation of a Delhi court over a cheque bounce case is expected to expedite the government’s move to amend the Negotiable Instruments Act ( NI Act), 1881 .

The court of Delhi metrolpolitan magistrate, Nupur Gupta, while disposing off a 2 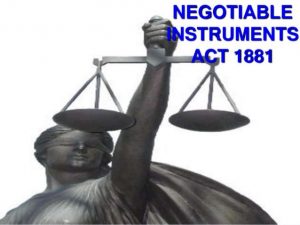 0 year old cheque bounce case, has observed, “ the very purpose of Negotiable Instruments Act seems to have been frustrated.”

The court has sentenced the  managing director of Prakash Industries, VP Aggarwal,  for one year imprisonment. , and directed him and his firm to pay Rs 10 crore each to two Sahara group companies. Aggarwal had received Rs5 crore each from Sahara India Airlines and Sahara India Financial Corporation as loan for his company way back in 1990s. Cases under NI Act was instituted against him and his company as the cheques he had issued in May 1996 were dishonoured by the bank due to lack of balance in the bank accounts.

The court noted that the present matter was pending since 1997 and “the very purpose of Negotiable Instruments Act seems to have been frustrated”.
The  court observation is likely to wake up the government of India to bring in the necessary amendment in the NI Act to expedite the legal proceedings. Particularly, after the demonetization when the government is going ahead full steam in switching over to a less cash regime, there is need to protect the people from the vagaries of cheque bounce cases by amending the  NI Act.

Jaitely said, while presenting the budget , the government is considering further amending the Negotiable Instrument (NI) Act to effectively deal with lakhs of cheque bounce cases by reducing timeframe for resolution of such disputes.

“As we move faster on the path of digital transactions and cheque payments, we need to ensure the payees of dishonoured cheques are able to realise the payments. The government is therefore considering the option of amending the Negotiable Instruments Act suitably,” Jaitely said.

“After cheque bounce, the litigation process is very complex and takes time. So, for traders with a bounced cheque, litigation takes a long time to recover the money,” he said.

The department of financial services is working on amendment of the NI Act to ensure the time taken to redress the cheque bounce cases is compressed, the finance minister said.

In the meanwhile, the government has promulgated an ordinance enabling the victim to file cases at place where a cheque is presented for clearance and not the place of issue. The ordinance was required as the Bill to this regard could not be passed in the Rajya Sabha. Over 18 lakh victims fighting court cases were benefited by this amendment.

Now that the NDA has managed a comfortable position in the Rajya Sabha it would go ahead with the amendments of the NI Act to protect the interest of the people.

Log on to www.thehindubusinessline.com for story “Govt clears ordinance to amend NI Act.”