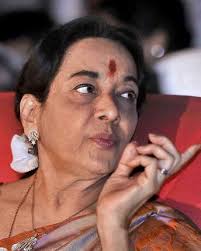 Visakhapatnam: Jamuna, the Chulbuli village lass Gouri of super hit Hindi film of yesteryear Milan (1967) is completing diamond jubilee of her filmy career. To mark the occasion, the veteran south Indian cinema actress will be conferred the title of ‘Navarasa Nata Kalavani’ at a function, here at Kalavani Port Stadium on September 17.

“This year we are celebrating the diamond jubilee of film career of Jamuna and presenting her a title ‘Navarasa Nata Kalavani’,” said south Indian film producer and politician, T.Subbarami Reddy, who had been felicitating film personalities every year on the occasion of his birthday.

Born on August 30,1937 in Guntur district of Andhra Pradesh, Jamana started her filmy career at the age of 16. She has acted in more than 200 films in Telugu, Tamil, Kannada and Hindi. She had completed 60 years of her film career.

Jamuna become a national filmy face in 1963 when her Hindi film Hamrahi hit the silver screen.  Jamuna and Ranjendra Kumar had made the film a super hit during the sixties. Hamrahi was a remake of Telugu super hit Bharya Bhathalu. Her other hit films are Letha Manasulu (1966) and Yashoda Krishna(1975) .