Tribunal on Mahanadi Water Dispute by Nov 19: Govt. of India 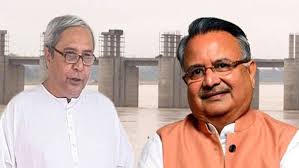 New Delhi: The government of India finally agreed to form a special tribunal to resolve the Mahandi water dispute between Odisha and Chhattishgarh. The Centre on Monday told the Supreme Court that its issue the notification by November 19, 2017.

Odisha has filed a petition in the apex court seeking a direction to the union government to form a tribunal under Section 3 of the Inter-State Water Disputes Act, 1956 to resolve the Mahanadi water dispute pointing out that the construction of dams and barrages in the upper catchment of the river by Chhattisgarh government is causing socio-economic and ecological hazards to the state. The Odisha government has also prayed the supreme court to direct the Chhattisgarh government to halt the construction work  of dams and barrage projects.  On July 25, the Centre and both the states presented their sides in the court. The Centre had submitted affidavit stating that draft for the tribunal has been prepared. However, it failed to produce required data in the court following which the court had deferred the hearing.