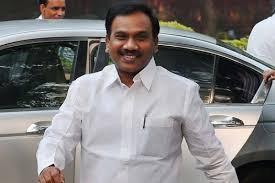 New Delhi: The CBI Special court Thursday  acquitted former telecom minister A Raja, DMK MP Kanimozhi and all other accused in the 2G scam case holding that the prosecution “miserably failed” to prove any of the corruption and money laundering charges. The scam had rocked the Manmohan Singh-led UPA-II government.

Supporters of DMK leaders Raja and Kanimozhi, who were anxiously waiting outside the jam-packed court room, broke into loud cheers as soon as the verdict was pronounced.

Special CIB judge OP Saini, while giving his verdicts in three separate cases in a packed courtroom at Patiala House premises,  said, “I have absolutely no hesitation in holding that prosecution has miserably failed to prove any of the charges against any of the accused.”

Severely criticising the CAG’s and CBI’s estimation of huge loss in grant of 2G licences, judge Saini in his 1,552- page verdict in the main CBI case held that some people “artfully” arranged few selected facts and created a scam “when there was none”. In all, there were 17 accused, including Raja and Kanimozhi, both leaders of Congress ally DMK, in this case that also included three corporate entities.

The three judgements, which together ran into 2,183 pages, included the one that stemmed out of the Enforcement Directorate (ED)’s money laundering case.

The ED and the CBI said they will challenge before the Delhi High Court the verdicts. There were 19 accused in the ED chargesheet some of whom figured in the CBI chargesheet filed in its main and offshoot case.

The stunning verdict came as an anti-climax in a case that had been repeatedly highlighted by the BJP during the 2014 general election campaign as the hallmark of corruption in the then UPA regime. The BJP turned the arbitrary award of radio frequency to telecom providers into a major political issue and put the UPA-II government on the mat.
The verdict has  unleashed a political slugfest between the BJP and the Opposition.

Buoyed by the verdicts, the Congress and the DMK said “truth” has finally prevailed and that justice has been delivered while the ruling party asked the Congress not to treat them as a “badge of honour”.

Raja, who was the Telecom minister in the Congress-led UPA government when 122 spectrum licences were issued to 8 companies in 2008 on first-come-first-serve basis, said his actions were for the benefit of masses. Raja remained in jail for over 15 months while Kanimozhi was in prison for six months before they were granted bail.

The trial in the three cases relating to the 2G scam began after the then Comptroller and Auditor General Vinod Rai in his report alleged 122 2G licences were given to telecom operators at throwaway prices when the UPA was in power and pegged at Rs 1.76 lakh crore the loss to the national exchequer.

The CBI had alleged that there was a loss of Rs 30,984 crore to the exchequer in allocation of licences for the 2G spectrum which were scrapped by the Supreme Court court on February 2, 2012.

The acquittal of all the accused brought to end the trial that lasted nearly seven years in one of the most controvesial corruption cases that involved politicians, bureaucrats and a host of businessmen and corporate executives accused of conspiracy in the allocation of spectrum or radio waves used to offer mobile servies.

Saini, whose court came into being on March 14, 2011 for hearing 2G cases exclusively, also acquitted Essar Group promoters Ravi Kant Ruia and Anshuman Ruia and six others in a separate CBI case arising out of the 2G scam probe.