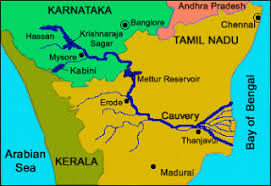 New Delhi: In a historic observation, the supreme court of India has said that the 1892 and 1924 pacts on Cauvery river water sharing are in vogue. The two pre-independence agreements are “neither inoperative nor completely extinct”, held the apex court while delivering the verdict regarding dispute over sharing the Cauvery river water sharing between Karnataka and Tamil Nadu on Friday.

The 1892 and 1924 pacts were signed between the erstwhile Madras Presidency and the erstwhile princely state of Mysore–now a part of Karnataka on the sharing of the Cauvery river water.

A three member bench headed by chief justice Dipak Mishra has said, “The two agreements of 1892 and 1924 had neither any political arrangement nor touched any facet of sovereignty of India. Per contra, the agreements cover the areas of larger public interest which do not have any political element and in this backdrop, the agreements are neither inoperative nor completely extinct.” The other two members of the bench are justices Amitava Roy and AM Khanwilkar.

Karnataka had attacked the two agreements of 1892 and 1924 on two counts, firstly by saying that the Maharaja of Mysore was not in a position to enter into an agreement on equal terms with the Madras government. Secondly, the state had reasoned that the manner in which the two agreements were reached, the status was conferred by the British government and the maharaja, the orders passed by the British government from time to time clearly showed the subservience of the Maharaja of Mysore to the paramount power of the British Crown.

Rejecting the contention, the bench said after the Constitution came into force, the exercise of power by the State over its citizens stood circumscribed by it.

“In the said case, the doctrine of paramountcy has no play. The two agreements, on a studied scrutiny, do not indicate any aspect that can be called political or touching any facet of the sovereignty of India,” it said.

It rejected Karnataka’s contention that after independence, the two agreements of 1892 and 1924 became inoperative and extinct.

The supreme court on Friday resolved the decades-old dispute between Karnataka and Tamil Nadu over sharing the Cauvery river water sharing by its crucial verdict enhancing Karnataka’s share by 14.75 tmcft and reduced Tamil Nadu’s quantum.