The Inside Story of Odisha BJP’s Presidential Race

Bhubaneswar: An uneasy calmness prevailing in the BJP in Odisha. After the shocking defeat in the Bijepur by-elections, the party is now sulking over the electoral debacle. 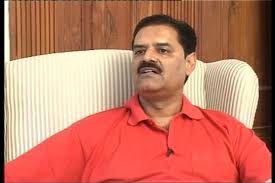 The saffron party had surged to second position pushing down the Congress in the Zilla Parisad elections in Feburary 2017 by winning 297 of the  853 ZP wards for which elections were held. The unexpected electoral success bolstered the confidence of the BJP in Odisha. There was a feeling that the anti-incumbency factor is creeping in and people have changed their mindset for a change in the government.  Taking into consideration the votes garnered in the rural elections, the party’s national president Amit  Shah worked out a Mission 120+ programme to wrest power from the ruling BJD in 2019.

But, then the Bijepur result proved all the calculations wrong. In Bargarh district, under which the Bijepur assembly constituency falls, the BJP won most of the ZP seats with a total votes over 90,000. Despite this, in the by-poll for the assembly seat which was held just after a year, the party got only a little over 60,000 votes and lost to arc rival the ruling BJD with a margin of a yawning over 42,000. 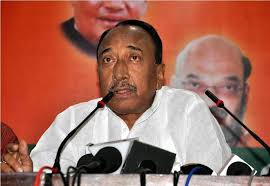 The defeat  shook  the party’ confidence. What further demolished the party’s aspiration is the clean sweep by the ruling BJD in Atabira and Hindol urban local body elections followed by a series of victory in by-elections to local and urban bodies. What was more demoralizing for the party’s cadres and leaders was the defeat  in Nizampur of Dasarathpur block  in Binjarpur assembly constituency of Jajpur which was visited by the party national president Shah as part of ‘Mo booth Sabuthu Majbooth’ programme.

In the changed scenario, the BJP in Odisha is going for a major rejig . The party has shunted out BJP Odisha unit general secretary (organization) Sarada Satpathy. The organizing secretary is a key post in BJP party  held by RSS pracharak. He has been replaced by Manas Mohanty . The BJP state president Basanta Panda is also on his way out even though his three year  tenure is to expire on January 14, 2019. 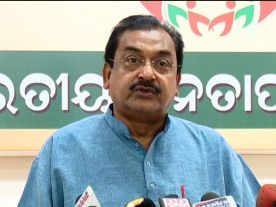 However, many in the party are yet to comprehend why the party punished Sarada and Basanta. Sarada and Basanta had very little or so to say no role in the Bijepur by-elections. It was quite known to all that the union minister  Dharmendra Pradhan was the sole handler on behalf of the party. It was he who  prepared the poll strategies and selected the party candidate.  Even the core committee members were kept in dark about the candidate’s name. Moreover, he was leading the campaign from the front while  Ranjan Patel and Kalandi Samal were in charge of resources, man power and poll materials in the constituency.

Perhaps the party’s strategists think that the change in the party organization would refurbish the party’s prospects in the coming elections. 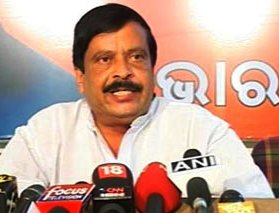 The party is now proposing to replace president Basanta Panda, Since the Lok Sabha and the state assembly elections are due early next year, the lobbying for the top post in the party has intensified.

While the union petroleum minister, Dharmendra Pradhan, who was virtually running the show keeping Panda as a dummy president, is pitching for party ‘s state vice-president Sameer Mohanty and leader of the BJP legislative group in the Assembly, Kanak Vardhan Singhdeo, in that order, his rivals are propping up the firebrand leader Pratap Sarangi who is known for his clean image and oratory . Singhdeo’s candidature is also finds favour with his group led by BJP senior leader Manmohan Samal. BJP’s National Executive member and senior BJP leader Bijaya Mohapatra, and BJP national secretary Suresh Pujhari’s names are also doing round in the party circle.

In this game of one-upmanship, surprisingly social media playing a dirty game. Last fortnight, the social media reported that Pratap Sarangi  met BJP general secretary Ram Madhav at New Delhi. Sarangi reportedly told Ram Madhav that he was not interested for the party president post. Similarly, another news went viral that Bijaya Mohapatra went to New Delhi and met party president Amit Shah. Moahaptara reportedly told that as president of the party he would be able to work with Dharmendra Pradhan. Shah invited Mohapatra to his residence next day. And, the news goes, the next day when Bijaya Mohapatra went to Shah’s house, he found Pradhan was present there.

India Whispers confirmed, that neither Pratap Sarangi had met Ram Madhav nor Bijaya Mohapatra Shah. Sarangi, who was to Delhi to attend a seminar on Sankaracharyas, met HRD minister Prakash Javedekar on some other works.  Neither he was invited by Ram Madhav nor he met him during his visit to Delhi.  Similarly, Mohapatra   had been to Delhi for some other works. There was no programme of his meeting Shah nor he met the national president. It was a mere  coincidence that the two leaders were at Delhi at the same time.

Then why this social media fake news . Supporters of Sarangi and Mohapatra believe that somebody is trying to spread the news that the two leaders are not interested for the post of party president. So that other contenders would find more space for lobbying.

Of late,  Pratap Sarangi, is emerging as a strong contender for the party top post in the state. Particularly, after the April 3 meeting taken by BJP general secretary (Organisation) Ram Lal and RSS joint general secretary Krishna Gopal  in Utkal Bipanna Sahayata Samiti(UBSS) premises in Mancheswar Industrial Estate of Bhubaneswar, his stake for the post gone up. Sarangi’s assessment of the party position in the state has impressed the two top RSS leaders. While other speakers at the meeting were giving a goody goody picture of the party’s election prospects in 2019 elections, Sarangi presented the realistic  scenario.

Given the clout Dharmendra Pradhan enjoys with the Modi-Shah duo, his nominee will certainly have an added advantage in the race.

But, as BJP considers Odisha as a potential state for its electoral ambition, putting  a right kind of person at the helm of affairs in the state ahead of the general elections is important. Now with Sarangi throwing his hat into the ring, it would be certainly difficult on the part of national president Shah and organizing secretary Ram  Lal to take a decision in selecting a new president for Odisha BJP.