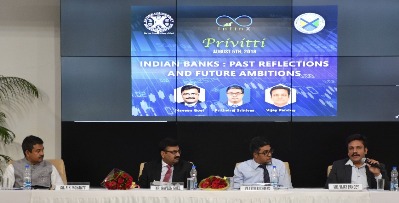 P.K. Mohanty, the moderator, who delineated how the theme is important not only for the students ofbusiness finance, but to every person present for the conclave. He then concisely stressed on the importance of banking structure for the smooth functioning of the economic system, while discussing about the latest scenario in the field of finance like demonetization, digitalization of the system.

Naveen Goyal, who briefed about the basic structure of what a bank constitutes of, relation between the banking system and money: connecting with the past as well as the future. He then further elucidated the prime activities of a bank: what all does ‘Letter of Credit’ comprise and data management while comparing past trends to today’s scenario. Topics like Blockchain, P2P lending, and banking innovations were taken up, while stressing on how digitalization is becoming a common commodity while it was a luxury previously.

Prithviraj Srinivas said,”Never let crisis go to waste“. He then brushed upon topics like monetary policy, Gross Non-performing Assets, and Non-performing Assets, which he elucidated by taking examples ofstress assets for different countries like Hungary, China,USA,etc.He also touched upon why the idea of public Asset Management Company will work in the future. He concluded by saying, “Crisis is a great teacher”.

Finally, Mr. Vijay Pandey introduced the gathering to efficiency of the banking system, how it can be measured only by using financial and non-financial key indicators in all possible manners. He urgedthe audience to achieve what might seem unachievable, in the face of uncertainty. He further briefed about how the banks can improve their profitability, the concept of Prompt Corrective Action and different types of efficiencies. The concept of being vigilant is what he stressed the most about and encouraged everyone present to take risks if they wanted to achieve what they aimed for.

The students present from varied schools of XUB got the opportunity to have a session of question and answer with the experts from the industry.