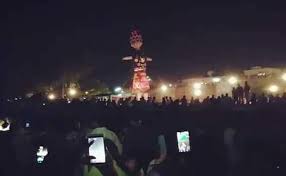 New Delhi: The National Human Rights Commission (NHRC) has issued notices to the Punjab government and the Railway Board seeking detailed reports regarding the Amritsar train tragedy within four weeks.

The NHRC has taken suo motu cognizance of media reports that several people were mowed down by a passenger train while they were watching Dussehra celebrations in Amritsar on October 19, 2018. In the incident  more than 60 people died on the spot and several others got seriously injured .

The commission has issued notices to the Punjab chief secretary and the Railway Board chairman to give details of the incident within four weeks. It has asked the state government to provide all the details regarding disbursement of relief and rehabilitation to the aggrieved families as well as the information on the status of the treatment being provided to the injured people.

Issuing the notices, the Commission has observed that it cannot be said to be a sane act by people to sit on the railway tracks, at the same time, the negligence on the part of the district authorities is apparent behind this bizarre and horrific incident.  It seems that the local authorities and the organizers did not properly managed the crowd, gathered to watch the Dussehra celebrations. It was the responsibility of the state to provide proper safety and protection to the citizens during the event.  If it is true, as reported in some sections of the media, that the railway authorities were not informed about the event, it indicates towards highly negligent and reckless attitude of the authorities responsible.  This is a case of serious violation of human rights of the victims.

According to the media reports, several people were sitting on the railway track, taking photographs and enjoying burning of the effigy of Ravan, when a train passed through crushing the people.  The government railway police (GRP) have registered a case of culpable homicide and causing death by negligence against  un-identified persons, on a complaint given by a local police officer.  The Railway authorities have stated that they cannot be blamed, as they were not informed about the ceremony.