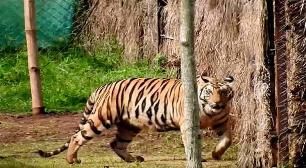 Bhubaneswar: The country’s first experiment of translocation of tiger has failed. The National Tiger Conservation Authority (NTCA) has decided to suspend the tiger translocation programme in Satkosia Tiger Reserve.

The NTCA plans to return tigress Sundari to its homeland Bandhagarh. Sundari will be made re-wild in Ghorela Centre Kanha Tiger Reserve in Madhya Pradesh before its relocation in Bandhvgarh Tiger Reserve forest. The tigress is at present confined in a small enclosure.

The NTCA DIG, Surendra Mehra, in a letter to Odisha chief secretary, expressed concerns as tigress Sundari has been kept in a small enclosure on the ground ‘being dangerous to human life’ without following the Standard Operating Procedure (SOP).

The DIG in his letter stated that apart from Sundari, another translocated tiger (T-1) was found dead within rationalised boundary of Satkosia Tiger Reserve on November 14, 2018. From a probe by senior officials of NTCA, it was found that the death of T-1 occurred under unnatural circumstances and preliminary probe indicated that the death of the tiger happened due to poaching.

On the basis of overall review of tiger augmentation programme, field reports and reports by assessment committee headed by senior officials, it was observed that both the animals, T-1 and T-2 were not monitored and managed as per the SOP and NTCA protocol.

Tigress Sundari brought from Bandhavgarh Tiger Reserve to Satkosia was captured without following due process laid down by the NTCA and relevant provisions of the Wildlife (Protection) Act, 1972. Moreover, the tigress was confined inside a small enclosure for more than one year without any effort to re-wild it as per the existing protocol, the letter read.

“In view of the above, the tigress T-2 cannot be allowed to be kept in small enclosure any longer. In the interest of Tiger Conservation, the Tigress T-2 shall be withdrawn and brought to Ghorela Centre at Kanha Tiger Reserve, Madhya Pradesh with immediate effect for re-wilding and subsequent release to suitable habitat,” wrote NTCA DIG, Surender Mehra in his letter.

The letter further stated that the tiger translocation programme at Satkosia tiger reserve shall be suspended till the ground situation improves as per NTCA guidelines, advisories and subsequent feasibility study by NTCA.