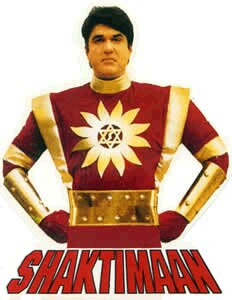 New Delhi: Popular 80s and 90s tv serials like; Ramayan, Mahabharat, Byomkesh Bakshi and Circus, have made a return on television during the Coronavirus pandemic, fans have now demanded for re-run of Shaktimaan.
As demand to bring the show back on television is at an all-time high, Mukesh Khanna has revealed that a sequel is also in the works.
Mukesh Khanna not only played the titular role in ‘Shaktimaan’, but also co-curetted it. Khanna is encouraged by the fact that fans are hankering for a Shaktimaan re-run during the lockdown.
Shaktimaan: The Animated Series was launched in 2011 and aired on Sonic. In 2013, a telefilm titled Hamara Hero Shaktimaan featuring Khanna as Shaktimaan and Uday Sachdeva as Junior Shaktimaan was aired on Pogo. The show was directed by Soumitra Ranade.
Khanna had also expressed his desire to make a film on the superhero. A 3D animated series on Shaktimaan has also been announced. Its trailer was launched at Comic Con India last year.