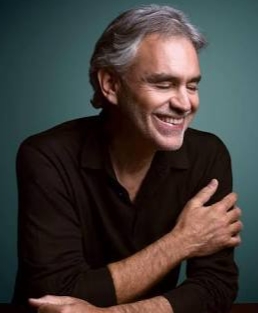 ANDREA Bocelli is the perfect symbol to represent all we need to fight the current misfortune that’s facing the world in form of the demonic virus. It is popularly believed (after Celin Dion said it) that if God would have a singing voice, he would sound a lot like Bocelli. Diagnosed with congenital glaucoma when five months old, Bocelli went completely blind at 12 following brain haemorrhage in a football accident while goalkeeping. With such disability he battled on to a law degree to become a lawyer and then to become the most important voice of current generation. So who can be a better symbol of the indomitability of human spirit against tremendous odds? When he was chosen to perform the solo Easter concert from Milan’s Duomo Cathedral in the wake of world wide corona virus lockdown, millions watched and listened online to his song ‘Amazing Grace’ (as in the accompanying video) played with the montage of empty streets of many cities including Paris, London and New York. In a message before he was to appear on the cathedral steps he said ‘ Thanks to music, streamed live, bringing together millions of clasped hands everywhere in the world, we will hug this wounded Earth’s pulsating heart’. What better image one needs in combating the pervading isolation and despair in the times of the virus?

What made humans invent music? Was music created or discovered? What is the purpose and role of music? These are eternal questions in search of definitive answers. It is believed that music dates back as the earliest form of human communication, a way for early communities to bring each other together socially. Archeological evidence suggests that musical instruments existed more than 40,000 years ago. Music is a core human experience and its generative process reflect cognitive capabilities. It has historically promoted human well being by facilitating human contact, human meaning, and human imagination of possibilities tying it to our social instincts. It has been a tremendous influencer in human development as it has improved our memory, attention, physical coordination and mental development. Classical music is believed to stimulate regeneration of brain cells while other forms of music improves mood, intelligence, motivation and concentration. It improves life and aides in physical, emotional, cognitive and social needs.

Music has offered much more than entertainment as it is an effective means of expressing our feelings as well as emotions. It is a fundamental part of our evolution, we probably sang before we spoke in syntactically guided sentences. Many a times in history music has been used as a way to escape from pain, both collective and individual. Then again music has been traditionally used for spiritual purposes by every civilisation, community, faith, race or tribe. The use and evolution of music in modern times have been predominantly for social bonding and creation of identity leading to its usages for political protest. The ‘Blowing in the Wind’ sung by Bob Dylan is a landmark for peace, war and freedom with its most iconic use in the civil rights rally of Martin Luther King. Before that Billy Holiday’s 1939 protest song ‘Strange Fruit’ brought out with enduring relevance the racism and brutal practice of lynching in American South. Back home Lata Mangeshkar’s ‘Ye mere watan ki logo’ moved our entire nation to a gruelling war effort against China. Bob Geldof’s monumental endeavour in organising Africa Aid used music to sterling effort in ameliorating human condition in Africa. U2’s Bono through his overtly political lyrics of ‘Sunday Bloody Sunday’ poignantly described the horror of British paratroopers killing Irish citizens at a civil rights protest in 1972 Derry.

Bocelli’s rendering of Amazing Grace on the steps of Doumo de Milano all by his blind self on an Easter Day to the backdrop of empty streets of those famous cities of the Christian World (Beijing is perhaps a bad afterthought) is both a prayer for God’s forgiveness and a testament of human resolve to fight the unjust virus. It is spelt out in bold baritone by a supreme artist who can not see evil(but can imagine God) and believes humans can not escape their innate instinct for doing good. Evolution has shaped us to be a social specy. It has shaped us to assemble in groups, to be friends with each other, to hug and touch those near us. These evolutionary properties, these natural instincts of ours, are being exploited by the virus to kill us. But evolution has bestowed on us other properties no virus can take away. We’ve evolved to be a cooperative specy, to work with one another. We are among the very few species that teach each other things. And we believe in compassion and grace. The only danger is that we are also capable of misinforming and miseducating each other. And immensely. We need some of those sense of community which helped us to evolve music through history and the kind of resolve Bocelli embodies in battling adversity in life.